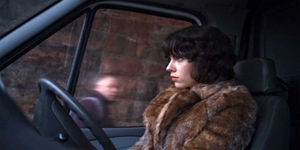 If you are a human male reading this then you already knew that Scarlett Johansson is just too damned perfect to be a human being. Well, director Jonathan Glazer (Sexy Beast) has now given us all proof beyond any reasonable doubt.

His new film Under the Skin, which has been a decade in the making, stars Johansson as an alien visitor from the far reaches of outer space who has come to Earth to fall prey on hitchhiking, unsuspecting youngish male homo sapiens along the roads around Glasgow, Scotland.

Brought to Earth by a shady extraterrestrial corporation whose ultra secret plan remains a mystery for a good part of the film. The movie features flashes of the Johansson character’s alien home world.

Without doubt this is Glazer’s darkest film to date. It was met with plenty of booing at the Venice Film Festival yet no one walked out but stayed glued to their seats with their eyes fixed on the screen which signals one thing in the movie industry — hit film.

Word of caution to parents: This is not a sci-fi film for your kids under 18 years of age. It is loaded with lots of graphic nudity and strong sexual content.