Hayao Miyazaki, co-founder of the critically acclaimed Studio Ghibli, hailed as the Japanese Walt Disney and best-known in the United States for Academy Award-winners Spirited Away and Princess Mononoke, has a habit of going in and out of retirement. Anime and film fans around the world mourned the potential retirement of the famed Anime maker and the final movie to be directed by Miyazaki received a lot of attention from fans and lovers of Studio Ghibli. Even if The Wind Rises is not Miyazaki’s last film, the animated drama stands strongly with the rest of the director’s body of work and should be used as an example of serious story telling in animation and Japanese Anime in general. 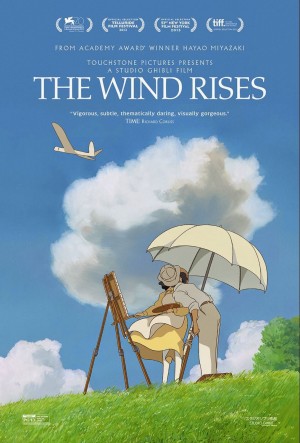 The Wind Rises is a fictionalized biography of Jiro Horikoshi, designer of the Mitsubishi A5M Monoplane fighter, which was precursor to the classic Japanese World War Two “Zero” fighter plane. Possessing a love of airplanes from an early age—and the occasional push from a regularly dreamed Italian Airplane Designer, Giovanni Caproni—Jiro endures the difficulties of a pre-war Japan while gaining the education necessary to work at an airplane manufacturer. While Miyazaki’s films are famous for its magical realism, where the line between the spirit world and material world are blurred and fantastic creatures challenge or impart wisdom to the protagonists, The Wind Rises is more subdued in its overt magic. Having a pace like a soft piece of classical music, the film tells a truly fantastical story without the need for walking castles or feline public transit. Jiro’s unbridled passion to create beautiful airplanes depict the hardships of his life—his country in economic ruin and the love of his life dying from tuberculosis—shows the magic of human endurance.

I was greatly impressed with the level of detail in the animation. Close-up shots of Jiro sketching designs and doing complicated math had his hand doing subtle and accurate movements and the ever present still life that accompanies Japanese Anime was especially beautiful. The American dubbed voice acting was superb with the likes of Joseph Gordon-Levitt, Stanley Tucci, and Martin Short providing their talents to the film.

The Wind Rises is a classic animated drama and will stand up against Miyazaki’s finest films of all time.