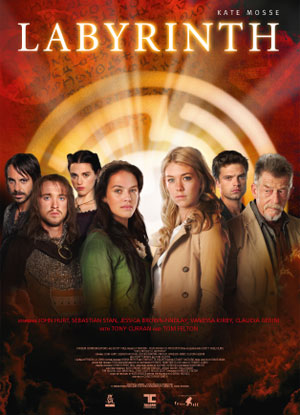 The CW Network is in search of The Holy Grail. No, not Monty Python style but with a serious four-hour event miniseries called “Labyrinth.”

The miniseries boasts of an international cast that includes John Hurt (Harry Potter, Doctor Who), Sebastian Stan (Captain America: First Avenger), Jessica Brown-Findaly (Downton Abbey), Tom Felton (Rise of the Planet of the Apes) and Katie McGrath (Merlin, Dracula). Also on hand are Emun Elliott (Game of Thrones), Claudia Gerini (The Passion of the Christ) and Tony Curran (Defiance, The Pillars of the Earth).

Adapted from Kate Mosse’s best selling book of the same name the story takes place in two time periods – 13th Century and modern day France and follows the journey of two women, although separated by 8 centuries, are on the same quest – the search for the elusive Holy Grail of Christ.

Originally released internationally in 2012 “Labyrinth,” directed by Christopher Smith (Triangle), will receive its U.S. debut sometime in 2014. CW president Mark Pedowitz said that the night and time of its debut on the network is still TBA.