Here is a first look at the new Doctor Who, Peter Capaldi with his companion co-star Jenna Coleman on the official Cardiff set for their first full day of shooting. 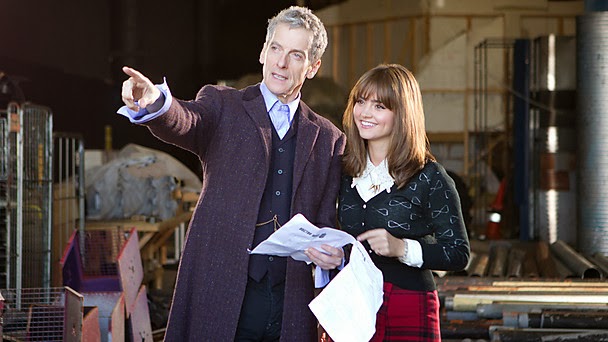 Capaldi still attired in his post-generation Will Smith suit will soon get his own look for his era of playing the Doctor. However, if it were up to me I’d leave the Matt Smith outfit on him. Capaldi should keep that one for his new Doctor’s look – gold pocket watch chain and all, minus the bow tie and fez. Very sleek indeed.

Commenting from the set Capaldi said, “New job, first day, slightly nervous. Just like the Doctor, I’m emerging from the TARDIS into a whole other world.”

Showrunner and head writer Steven Moffat was a bit less nervous and quite excited concerning this debut. “First the eyebrows! Then, at Christmas, the face! Coming soon, the whole Doctor. In the Cardiff studios, the Capaldi era begins.” Steven has written Peter’s debut episode with direction coming from Ben Wheatley (“Kill List”).

The first season of the Capaldi era will continue shooting in Cardiff and various other locations until August 2014. The proposed airdate on BBC and BBC America for series 8 is scheduled for sometime in the third quarter of 2014. Stay tuned to Slice of SciFi for updates.