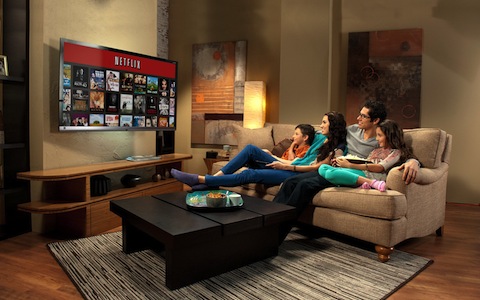 For 2014 Netflix is looking to stave-off its most looming competition in Amazon.com for the online video streaming business.

The company announced it will be offering its customers (old and new) a less expensive way to watch their favorite films, TV shows and original Netflix entertainment.

Before January 1, 2014 Netflix’s lowest and most basic package for video streaming came at a cost of $7.99 (USD) per month. This price allowed subscribers to watch their picks on two separate viewing screens at the same time. Kids could watch in their rooms on their computer while Mom and Dad watched on the big screen in the TV room.

This new offer is a dollar per month cheaper but the drawback is the viewer can only watch on one screen at a time, which for most subscribers probably won’t be much of a problem and it saves them $12.00 (USD) a year.

Currently Netflix does offer a four screen package at $11.99 (USD) per month and is toying with the idea of a three screen approach for $9.99 (USD) a month, but that one is still on the drawing board.

The main reason behind these different approaches is to not only allow Netflix to stay competitive in the online streaming market but to help pay for their increase in original programming. Now that their shows like “House of Cards,” “Lillyhammer” and “Orange is the New Black” are all the rage with the press and major awards junkies Netflix is in it whole hog, and original programming isn’t cheap to make, especially with stars like Kevin Spacey, Robin Wright, et. al. on board.

When paired with Amazon’s Prime Instant Video package at $79.00 (USD) per year the difference per month for the $6.99 Netflix edition is negligible. What Amazon Prime has going for it that Netflix lacks is that annual price also gets customers free 2-day delivery on nearly all its products purchased online as well as discounts on certain Prime offerings; so when that is factored in Netflix is climbing up hill at this point. However, looking at its current share price on Wall Street one would never realize that Amazon is even a blip on Netflix’s radar………but, the honchos at the company know better.