Regarding the movie Ender’s Game, I really only have one thing to say and that is… YAAWWWN!

I kept wanting to check the time, wondering when the darn thing would be over. 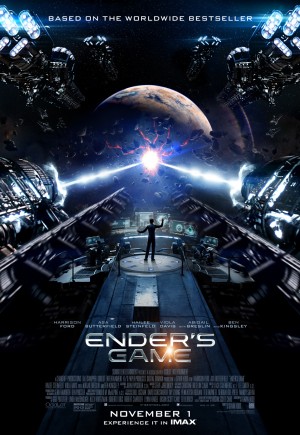 I’m not somebody who normally thinks that written material can’t be adapted to the screen. It’s generally my philosophy that, in the hands of a truly skilled filmmaker, the feel or essence of anything that can be conveyed in words can also be conveyed through film. Some material may be harder to adapt, but it’s generally my opinion that anything that can be written can also be adapted. However, my general philosophy seems to run into a brick wall where Ender’s Game is concerned. Despite having gorgeous visuals and a cast with some first rate actors (Ben Kingsley, Harrison Ford) the movie falls flat and I think it may just be the nature of the material. While I remember being utterly entranced by the story of an illegal third child going through military training, when I read the book some twenty years ago, seeing it onscreen didn’t have the same effect. I found the book to be gripping, a page-turner. Seeing the same story on screen was just, kind of boring.

Granted, my problems with the film may not just be the source material. I saw it with a friend who observed that it suffered from similar problems to the first two Star Wars movies (Phantom Menace and Attack of the Clones) in that it threw characters on the screen and expected you to care for them. The character development was definitely somewhat lacking, and surely contributed to the overall feeling of flatness about the film.

I’m not going to say Ender’s Game is a terrible movie, but I do think it is a dull and lifeless one. It’s pretty to look at, it’s got some good actors, and there wasn’t a lot going on that blatantly annoyed me. Beyond that the film just didn’t engage me or make me care. Instead it left me wanting to check the time, wondering when I could get out of the theater and on to something more interesting.