Seeming like a gag gift to get for people like me — where you know that we like Star Wars but you’re not sure what exactly we already possess in our collection — William Shakespeare’s Star Wars is an audiobook full of surprising quality and intelligence that should delight any fan of The Bard or of the Beard of George Lucas. 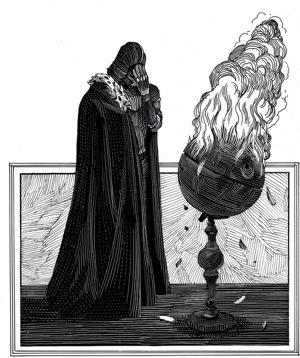 With every line actually being in iambic pentameter, the addition of movie sound effects, and John William’s familiar score, and character’s voices having the proper effects to it, this audiobook gives the listener a chance to be in an alternate world where Shakespeare wrote our favorite epic from a galaxy a long time ago in the sixteenth-century and performed it at the Globe Theatre that was painted like the Death Star.

I personally enjoyed how this wasn’t just a reworking of the dialogue of the movie with a Shakespearean tinge. This was written by someone who knew the works of The Bard and how he wrote his plays. A chorus narrates the action scenes and the lovable R2-D2 beeps and twirps when around other characters, but has wonderful soliloquies on the part he plays when he is alone. The writing also has a lot of the same lines from the movie, but reworked into the iambic pentameter with hilariously awkward results. Doescher’s love of Star Wars shows in the work with this dialogue and little nerdy inside jokes like Han Solo stating, “Whether I shot first, I’ll ne’er confess!”

This audiobook is a great listen that inspires me to purchase the book it is based on and find a group of thespian friends to put on a nerdy show in the park.