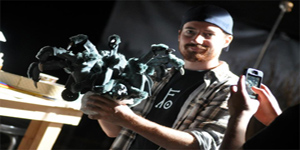 I came across a 2008 film on the internet called “The Coming,” written and directed by Chad Costen (Death Wish, Gaia: The Series). I was amazed at the brilliance and the beauty of the story and became captivated by Costen’s ability to guide a group of relatively unknown actors to give the viewer a striking character driven performance that I would easily rate A-List.

The film opens with the protagonist, a small boy about 10 years old named Tom Elliott, being babysat by his older sister Samantha and her boyfriend. Her parents are on their way to the hospital for the birth of baby sister Ashley. In their drive to the woods to look at the stars an unusual shooting star stops over the three of them causing Tom to run away in fear with Sam’s boyfriend taking off after him leaving the sister alone. Sam is taken by the mysterious visitors, but the sheriff, an emotionally troubled racist, spends his life trying to prove that an reclusive Arab named Essedine kidnapped and killed the girl. Next scene it is eleven years later, Tom is still stuck in the small farming community delivering papers in the morning and assuming the job of high school janitor.

The rest of the film exposes the dark underbelly of many of its residents, the fear that gripped nearly all of them for the past eleven years, racist bigotry that leads to hate and murder, animal mutilations and a centralizing local event in which over sixty of the townsfolk are all struck down with nose bleeds and passing out for several hours all at the same time. The backdrop for all this on the worldwide front is an escalating war in the Middle East and these strange symbols in an unknown language popping up all over the world with corresponding crop circles.

There isn’t any big bangs or things being blown up in this low budget but excellently written, directed and acted movie. However, it has what so many sci-fi movies lack, a deep look into the hearts and minds of its main characters with supporting cast also developed to the point that they are more than just window dressing for the leads. Tom is center stage as we the audience watch and have revealed to us the world through his perception. He is our eyewitness to the love, hate, bigotry, tragedy, fear, insanity and benevolence of human beings at their worst and their finest moments during a time of upheaval and great uncertainty.

There is a slight religious undertone in this Canadian film that is very understated and that might possibly be why it did not get the attention by the independent film critics, although it shouldn’t have mattered it is so inconsequential to the plot. Of course since Costen did have a very limited budget and this was his first major film, there are one or two technical problems I had with it but they too were so unimportant and did not distract from the story so I could easily overlook them.

It deserves another look and we present it to you here. I hope you are entertained and enjoy it at much as I did.