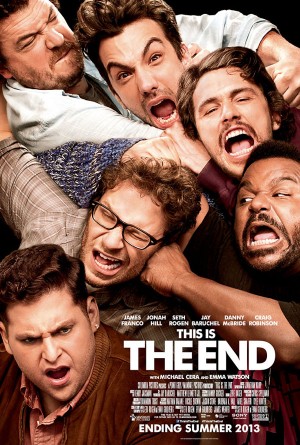 This is the End is a black comedy starring James Franco, Seth Rogan, Craig Robinson, Jay Baruchel, Danny McBride, Jonah Hill, and a ton of other famous people, all of whom are playing exaggerated versions of themselves, most of whom die in truly hilarious yet horrific ways.

Not for the weak of stomach, those who can’t handle hearing foul language constantly, those easily offended by drug usage, nor anyone who has issues with giant genitalia, but if you want to see a film where you seriously have no guess what’s going to happen next, This is the End will definitely take you on a funny, surprising ride.

Interestingly enough to me, two of the most spiritual films I’ve ever seen are comedies made by people most wouldn’t associate with religion or spirituality. Kevin Smith’s Dogma is one of my favorite movies, and within all the laughs and gross outs, the basic message of Dogma is that God loves us and wants us to be happy and do right by each other. I wasn’t expecting the same thing from This is the End, and that was probably the biggest surprise for me, because this movie’s message, like Dogma’s before it, is that if you even just try to do right, repent, and be even a little bit decent, God’s willing to forgive you and save you.

Of course, before we really get that message, what we get is a lot of Young Hollywood and their related brethren smoking, toking, cursing, drinking, and then dying in some hilarious and disgusting ways while we see what the Rapture might really look like. And within all this, there’s a very straight and narrow story dealing with how two old, lifelong friends (Seth Rogan and Jay Baruchel) are dealing with the inevitability of life changes altering their friendship and themselves.

James Franco pretty much allows this movie to make fun of every aspect of his life and career, and it’s all funny. There’s what amounts to a love triangle involving Rogan and every other two guys near him at any time, albeit without sex. Well, at least without sex with Rogan. (By the time it happens, Jonah Hill deserves it, is all I have to say that won’t be a spoiler.) Danny McBride is brilliant as the movie’s biggest villain (and, to the gal who shouted, “NO!” in the theater when Franco hands McBride a weapon, all I can say is, we were all laughing with you, we swear). Jay Baruchel, who was great in Tropic Thunder and ruined The Sorcerer’s Apprentice, is the most relatable he’s ever been on screen. Channing Tatum has one of the most hilarious cameos in a long time. You’ve seen Emma Watson’s big scene in the trailers, but it’s still funny in the movie. There are many more cameos and small parts filled by people we read about in the tabloids — and this movie pretty much insinuates they’re all as awful in real life as we think they are. You’ll hate most of the characters by the end of the movie, even as you’re laughing, but you’ll still want them to survive, and that’s part of the movie’s point and charm.

This is the End is the blackest comedy I’ve seen in years, with some of the bravest, and funniest, performances you’ll see in a long while. It’s not a perfect film, but if you can handle it, it’s truly funny, with a lot more heart than it wants you to know it possesses.

This puppy earns its Hard R. Rating: B