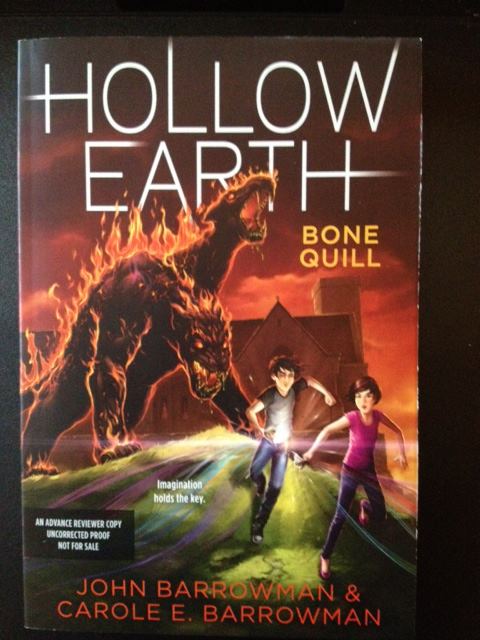 As I suspected during my review of the first book from John and Carole Barrowman, “Hollow Earth,” there is much more to their story and it continues with the second book in the series titled “Hollow Earth – Bone Quill.”

The adventures of Matt and Emily Calder, the twin siblings who are gifted Animare continues. If you read the first exciting novel then you are already aware that an Animare is someone who has the uncanny ability to draw, sketch or paint any thing in their imagination and it comes to life. These two particular kids are also telepathic and are capable of actually entering their paintings or those of another artist and live in that imaginative reality as if it were real, which it always has the danger of becoming.

Near the end of the first book the Barrowman’s reveal that the children’s mother, Sandie, who is a successful art restorer, is also an Animare. Their father, named Malcolm, whom was a mystery of sorts turns out to be a Guardian. The Guardians are a secret group of people given the task to watch over, protect and control Animare. They need watching because if someone skilled at controlling others ever got control of an Animare’s imagination then they could create all sorts of chaos and introduce it into the real world. Hollow Earth, the home of every kind of evil and chaos imaginable, is a place that can only be entered and unleashed on the world through the talents of the Animare which is why they are so important and need a Guardian. Matt and Em are especially gifted because their mother is an Animare and their father a Guardian making them unique and in need of extra care and guardianship.

At age three their father began to change and started exhibiting a strange obsession with finding Hollow Earth over the grave and stern warnings of his wife Sandie and his own father Renard, also a Guardian and owner of the Abbey where they and other Guardians and Animare reside in Scotland. When this obsession led Malcolm to put his infant children at great risk of their lives in his pursuit to use them to find Hollow Earth, both Sandie and her father-in-law Renard, were forced to take drastic measures and ended up painting and trapping him in an alternate reality, locking him in the clutches of a demonic being on canvas.

As in the first novel this one takes place in two different time frames – present day and the Middle Ages on Auchinmurn Isle at the Monastery of Era Mina. By this second book the twins have just become teenagers aged thirteen and with informative flashbacks we are brought up to date with the main events that have occurred in their lives from the closing of Book One to this new Book Two.

Many of the characters from the first novel return including the twins’ best friend Zach who is now an apprentice Guardian. With the second novel there are exciting adventures that take the twins to Monet’s England, a meeting with Grendel, battles with Vikings, mud monsters, mysterious Skinner’s Bog, the fictional Peryton, a beast that is a combination stag and large winged bird with long sharp talons on its rear feet and horse hooves on its front legs.

“Hollow Earth – Bone Quill” has all the intrigue and excitement of the first book in the series and is even more mysterious. The end may leave many sad and wanting more but that’s a good thing because it means there has to be a Book Three on the horizon.