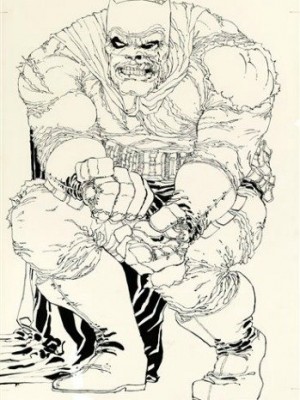 An original pen and ink drawing used to create the cover for issue two of The Dark Knight Returns will be sold next month and many predict it will go for a near-record price.

The drawing from the iconic series by Frank Miller will be sold next month in Dallas by Heritage Auctions.

It’s the first cover from DC Comics’ 1986 four-issue Dark Knight miniseries to be sold and is expected to go for more than $500,000.

“For fans of modern comics, this drawing is where everything really begins,” he said. “This moment defines Miller’s Dark Knight, and the modern day perception of Batman, like no other drawing.”

The only cover Hignite says might come close is the next in the series — with Batman and Robin — that was auctioned two years ago for nearly $450,000.

“By any measure this is one of the most desirable comic books in existence,” said Barry Sandoval, director of operations for comics and comic art category at Heritage. “There are just a few comics ahead of this on the ultimate comics list, but it’s close when you see just how fantastic the shape of this book is.”

The record price for a comic book remains “Action Comics” No. 1, which sold for $2.16 million in 2011. That featured Superman’s first appearance.