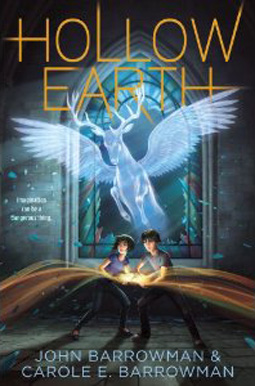 Many know John Barrowman only as an actor, specifically, a sci-fi actor in Doctor Who and his lead as Captain Jack Harkness in Torchwood. However, John is much more accomplished. He is a singer, dancer and author. Along with his sister Carole E. Barrowman, who is a Professor of English and Director of Creative Studies in Writing, they have collaborated on a children’s novel titled Hollow Earth.

The novel has two main locations, or better yet, time periods. One is located in the past and in the fantasy world of Auchinmurn. The other is situated in present day Scotland and England and centers on siblings, twins, brother and sister who are gifted, or cursed, depending on your point of view, with a very special talent; they are Animare. What is an Animare? It is a “supernaturally gifted artist who has such a powerful imagination that he or she can alter reality when painting or drawing. Simply put, an Animare can choose to animate his or her own art.” The other gift they share is they are telepathically linked.

From this description found in the pages of Hollow Earth one can appreciate the novel’s tagline – “Imagination can be a dangerous thing.”

The protagonists are twelve-year-old twins Matt and Em Calder, and like nearly all kids of that age, they have a vivid imagination, a hunger for excitement and adventure and the patience of a flittering fly. What the siblings aren’t aware of near the start of the book is the extent of their powers or that others know of their talent and have been quietly and secretly observing the pair to watch for the development of their gift. Keeping watch over the twins is a Society called the Council of Guardians. The purpose of the Guardians is to find, watch, and guide those gifted as Animare so to ensure their talent isn’t used in a way that could bring harm to others or to reality as a whole. They created and strictly enforce the five rules for all Animare.

The antagonists includes any group who would use an Animare for their own selfish or devious means. The greatest threat to reality would be the unleashing of those that inhabit the realm known as Hollow Earth, thus the title of the novel. Hollow Earth is the prison home of all trapped monsters, griffins, and demons.

In the other reality known as Auchinmurn the main center of activity is found at The Abbey, a fortress-like structure for a cloister of Middle Ages monks, some of which are Animare. It is these monks, who belong to The Order of Era Mina, who are responsible for keeping all the evils in Hollow Earth from ever escaping as a result of the misuse of an Animare’s imagination. The Abbey remains in continuous operation right into the 21st Century.

Two other very important characters in the story are Sandie Calder, the single mom of Matt and Em, who is herself a gifted artist, but not an Animare. What makes her role so pivotal is the early exposure she gives her twins to the art world due to her job as a sought after art restoration specialist for several museums across the world. Zach Butler is the 14-year old deaf friend of the twins. He is highly skilled in writing computer code for software and video games, as well as extremely proficient in lip reading which comes in very handy in the story. Zach lived in the Abbey at Renard with his father Simon Butler since he was an infant. The twins and Zach know each other as a result of the friendship between their parents and the fact that the twins’ grandfather owns the Renard Abbey.

Hollow Earth is a fantastic tale that is a bit lengthy for a children’s book (382 pages of story telling) but J.K. Rowling has already proven that this is not a hinderance if the pace is kept sufficiently speedy and engaging. Hollow Earth is certainly all of that. It has great action superbly told and it has one other thing that a lot of children’s books don’t have – it is also an interesting enough read to keep adults turning pages and be intellectually challenged in the process.

The main audience for this novel are those ages eight to twelve and before the series of Harry Potter books proved us all wrong I would have said eight might be a tad youngish, but that all goes out the window these days and I would have raised the upper age limit to adult instead of twelve. But, for commercial reasons I get it. What kid wants to have their parents spend money on them to read something that would also keep mom and dad engaged too? But secretly parents, between you and me, buy this one for yourself as much as for the kids, just don’t tell them you like it too.

It wouldn’t surprise me at all to see this novel become a series of stories and one day end up on the silver screen. It definitely lends itself to that kind of production.

To sum it up — John and his sister Carole have created a nearly perfect world of imaginative delights with Hollow Earth.