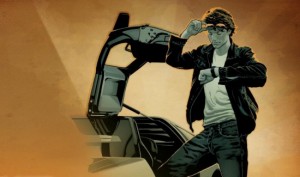 Stoltz was cast in the iconic role when Family Ties producers wouldn’t let star Michael J. Fox have time off to film the movie.  Stoltz began filming the role (footage can be seen on the Blu-Ray set that came out a few years ago), but a few days into the production process, producer Bob Gale and director Robert Zemeckis realized that Stoltz wasn’t the actor they wanted.  An appeal to Ties producers got Fox to the set and the rest is history.

But Stoltz wasn’t the only casualty of the recasting.  Actress Melora Hardin has originally been cast as Marty’s girlfriend. However, she was taller than Fox and the role was recast as well.

Levy heard this news in an interview with Future producer Gale and wondered what Back to the Future would have looked like with Stoltz and Hardin.   That lead him to create the comic book Back to Back to the Future.  In the comic, Gale and Hardin go back in time to the production of the film and instead of recasting the roles, they decide to let history take its course and find out what happens.

Levy says part of his inspiration was comments made by Gale about how difficult the recasting of Hardin was.

“All I could think after reading this statement was that here was the man who wrote the most popular films ever made about time travel, and he had this major regret. So I decided I wanted to tell the story where he gets to go back in time himself, through a parody of the films he helped create, and right this wrong,” Levy tells EW.

Levy says he made sure he could legally publish the comic before he began the work on it.  He also says that the comic isn’t meant as a slight to either Fox or Stoltz.

“I think Michael J. Fox and Eric Stoltz are both talented actors, but both have very different personalities. I imagine throwing five weeks of work on the cutting room floor only happens when someone just isn’t working for the movie. It couldn’t have been an easy choice, but I’m sure it just came down to Eric’s portrayal of Marty McFly not being the personality that the filmmakers envisioned for their movie,” he says.

Levy says an profits from the comic book will be for “the future” and that the first three issues of the six-issue series will be given away free on-line.

If you’re curious as well, you can download the first issue free HERE.  And you can keep an eye on the series’ Facebook page and official website for further updates.