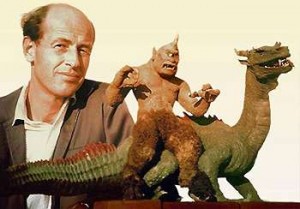 For those of you, who are dazzled by the magic of stop motion and effects, be sure to check out the Sony Movie Channel where in the weeks to come they will be broadcasting some of the most celebrated movies by stop-motion wizard, Ray Harryhaussen. For a month the channel will be showing his classic movies, including Jason and the Argonauts.

The month long celebration will be kicked off with a documentary called Ray Harryhausen: Special Effects Titan. It will be airing on Wednesday, April 3rd at 8e/7c/5p (repeated on April 7th, 24th, and 28th), however there is a hitch. Not everyone can get the Sony Movie Channel. Currently it is on DirecTV channel 563, the Dish Network channel 386, and AT&T U-Verse channel 1791. Most major cable companies do not carry Sony Movie Channel, but please check your local cable provider to be sure.

The documentary, which is not available on DVD as of this time, will feature a wealth of interviews from the many filmmakers who have been heavily inspired by Harryhausen, including Steven Spielberg, Guillermo del Toro, Tim Burton, and the late Ray Bradbury.