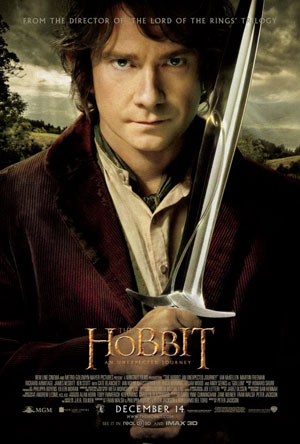 I am a Tolkien fan. I’ve read The Hobbit and The Lord Of The Rings more times than I can count. I’ve also seen The Lord Of The Rings movies so many times I can almost recite it word for word. Imagine then my excitement when I knew that Peter Jackson was going back to Middle-Earth to give us The Hobbit. Imagine that excitement tripled when I learned that it was being turned into a trilogy. I know that some people thought it would be too much, that taking what was a single novel into a trilogy. Luckily Peter Jackson, along with Fran Walsh and Philippa Boyens and Guillermo Del Toro have drawn from really great sources, namely The Silmarillion, The Lord Of The Rings and its appendices. What they have crafted is a very enjoyable movie that does honor the spirit of the book.

The cast for this film is remarkable. First off, we are lucky to have Ian McKellan return as Gandalf the Grey. His sense of whimsy and eccentric behavior brings to life the lovable wizard in a way that allows us to enjoy him more than what we were given in the first half of Fellowship Of The Ring, and he was true to everything that I remember from the book, even down to some of his lines spoken in the movie. McKellan may have looked a little older than when when he filmed The Lord Of The Rngs, but seeing that certainly didn’t stop him from delivering a great performance on a level which distracted me from any aging that may have been visible. We’ve also been fortunate to see the return of Ian Holm and Elijah Wood as the elder Bilbo and Frodo Baggins, and the way Jackson wove their story, tying The Lord Of The Rings back to The Hobbit was enormously enjoyable. Seeing Hugo Weaving come back as Elrond was of no surprise, but the return of Cate Blanchett as Galadriel turned out to be a welcome surprise. Cate is beautiful to watch and we were given more of her elven witchlike wonder which deepens the mystery that is Galadriel. Of greater surprise (for those who did not read any casting spoilers) was seeing Christopher Lee reprise his role as Saruman, only this time we truly are given a Saruman the White, and in a very clever twist, we are given a scene that came out of Lord Of The Rings, although written in a manner that not only fits here in The Hobbit, but oddly enough actually makes a lot of sense. Also, in what I think is something of a clever casting coup, Jackson and company give us Radagast the Brown as portrayed by Sylvester McCoy, whose quirky and comedic manner worked perfectly for this character.

Again, in an attempt to further flesh out the book for this film, we are given story elements that were given to us later in Lord Of The Rings, and while some purists may feel that this does not belong here, it was still a great joy for me to see this here given that we were denied so many other story elements from the Lord Of The Rings movies. As for the dwarves, there were far too many for me to list them one by one, and while I was originally skeptical given how some of them were depicted, within 60 minutes into the movie I found myself no longer caring.

One special mention must be for Richard Armitage as Thorin Oakenshield. I was originally very doubtful at when I saw that he had been cast in this part, but from the moment Armitage appears on the screen he commands each scene as only the King of the Dwarves can possibly do. Lastly, a very special mention must be given to Martin Freeman as the young Bilbo Baggins. I’ve been a fan of Freeman for many years, most recently as Watson from the BBC series Sherlock. I had complete faith in his ability to play Bilbo and he did not disappoint as he shows us the beginnings of what once was a humble Hobbit, and through his own series of adventures, becomes a truly brave and daring member of Thorin’s party. It wasn’t Oscar-quality, but most appropriate nonetheless.

The movie, for the most part, is pretty faithful to the book, and even when it isn’t, the liberties taken are so minor that they can easily be overlooked as being nothing more than artistically necessary for the sake of filmmaking. Yes, they can be overlooked, all except one. I will not say what the scene is, but I know that any other serious Tolkien fan would just as easily spot as I did, and while this “sin” in the story telling didn’t take away from my overall enjoyment of the film, it did stick in my mind for quite some time as to warrant a lot of spirited discussion.

The Hobbit has a certain look which some might find disappointing, especially for those who are huge fans of The Lord Of The Rings, and while the previous trilogy had a certain gritty, albeit fantastic, look to it, this movie had a certain glow throughout most of what was shown. After all, this story does take place in a time before the evil of Sauron had a chance to fully manifest itself as we saw in The Lord Of The Rings, and while there is a creeping shadow of darkness that is moving throughout Middle-Earth, the beauty and magic, and perhaps even some innocence, is shown here which reminded me that not only is Peter Jackson and company, superb storytellers, they are also master painters as they breathed life into the beautiful illustrations of Alan Lee and John Howe, thereby giving us the wonderful opportunity to revisit the glorious world of Tolkien’s Middle-Earth.

Is this a perfect movie? No. Was it an enjoyable movie? Absolutely, and I can’t wait to see it again, not to mention the next installment. Peter Jackson, hurry up with the next Hobbit film!!!