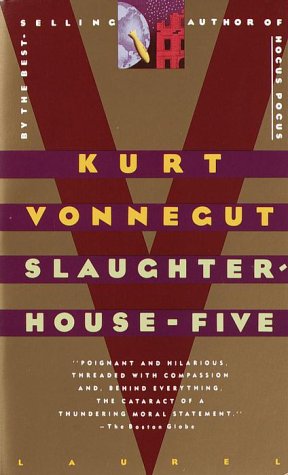 When the School Board of Republic High School in Missouri received a complaint about Kurt Vonnegut’s Slaughterhouse Five, the school district banned 150 students from reading the book as part of their high school curriculum.

In response, the Vonnegut Library has stepped up and is offering those students a free copy of the novel.   Copies are being made available from an anonymous donation, according to io9.

The school board was responding to to a complaint by Missouri University professor Wesley Scroggins, about that book as well  Sarah Ockler’s Twenty Boy Summer.

“This is a book that contains so much profane language, it would make a sailor blush with shame. The “f word” is plastered on almost every other page. The content ranges from naked men and women in cages together so that others can watch them having sex to God telling people that they better not mess with his loser, bum of a son, named Jesus Christ,” Scroggins wrote in his complaint.

The school board voted unanimously to remove both books from class reading lists and from the high school’s library.

That lead to the Vonnegut Library stepping in to defend the students’ First Amendment rights.

“It is shocking and unfortunate that those young adults and citizens would not be considered mature enough to handle the important topics raised by Kurt Vonnegut, a decorated war veteran. Everyone can learn something from his book,” library executive director, Julia Whitehead, told Reuters in a statement.

The library promised it wouldn’t share information of which students took advantage of the offer, saying that it wasn’t asking the students to like the book, but wanted to give them the chance to read it and decide about it for themselves.