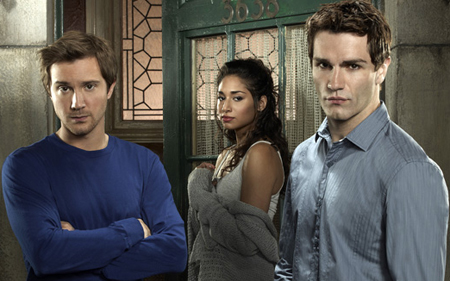 Through its first nine weeks on Syfy, and including repeat broadcasts, Being Human has been seen by 19.1 million total unique viewers.

“’Being Human’ has proven to be a winner for Syfy on all fronts,” said Stern. “Using the original format as inspiration, showrunners/writers Jeremy Carver and Anna Fricke – along with a superlative team of writers, cast, and production – have created an amazing, compelling series in its own right. We can’t wait to watch Aidan, Josh and Sally continue their struggle to be human in the second season!”

Being Human stars Sam Witwer, Meaghan Rath, Sam Huntington and Mark Pellegrino and is a Muse Entertainment production in association with Zodiak USA. It is based on the acclaimed series, Being Human, created by Toby Whithouse and produced by Touchpaper Television, part of Zodiak Media Group.

In Being Human, leading everyday lives is a lot harder than it looks for three supernatural roommates – vampire Aidan (Witwer), ghost Sally (Rath) and werewolf Josh (Huntington) – who share their secrets and a Boston brownstone. Together they learn that there are fates worse than death and more to life – and the afterlife – than most “normal” humans could ever imagine.