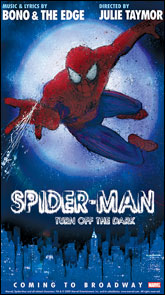 After years of delays, one of the most expensive musicals in Broadway history may be headed for a short run.

“Spider-Man: Turn Off the Dark” had a preview performance Sunday evening and according to reports, it didn’t go well.  Technical glitches stopped the show multiple times during the performance and some audience members said it was more like a dress rehearsal than a preview.

Now, it appears that the musical could be headed for a short run.

Variety reports that Foxwoods Theater, who is hosting the show, have already begun looking for a new show for the theater.

Three producers told New York Times that they were contacted by the Foxwoods’ new general manager, Erich Jungwirth, who introduced himself and asked if they “had productions in the works that might be a future fit for the Foxwoods Theater.” The producers said that Jungwirth asked them to keep the theater “in mind as they developed or optioned productions for Broadway.”

The producers, who spoke on the condition that they not be named, said that such introductions are common for a new theater manager, but they also said Jungwirth seemed uncertain about the length of Spider-man’s run at the Foxwoods.