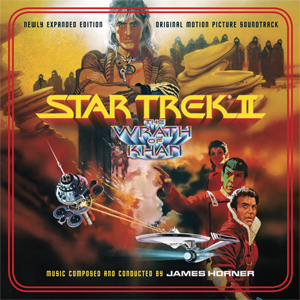 Among the many fantastic elements from 1982’s classic film, “Star Trek II: The Wrath of Khan” is composer James Horner’s score. And while the soundtrack has been available on record and CD for years, fans were only getting a small sample of the overall epic score. Until now.

Now fans can purchase the full score to the greatest of the original “Star Trek” films.

Star Trek II was released on LP by Atlantic Records in a 45-minute program issued on CD by GNP/Crescendo (long out of print). Although the album program featured the score’s highlights, fans have long clamored for a complete-score presentation—adding such important cues as the mind-control sequences involving Chekov and Capt. Terrell being possessed by alien eels, the revelation of the Genesis Cave, the final battle between the Enterprise and Reliant, and Spock’s death and funeral (“Amazing Grace”). FSM delivers in cooperation with Rhino Entertainment (who administer the Atlantic Records catalog) and Paramount Pictures (owners of the Star Trek film franchise)—remastering the complete score from Dan Wallin’s 1982 three-track film mixes, stored in the Paramount vaults in sterling sound quality.

The 28-page CD booklet features commentary and track-by-track breakdowns including new and historical interview quotes by Horner, Meyer and others involved in the production—as well as our customary art direction by Joe Sikoryak featuring stills, rare artwork and behind-the-scenes photos.
To borrow a quote from a completely different movie—American Beauty—here at FSM we feel about this CD like Kevin Spacey when asked about the hotrod in his driveway: “It is the car I’ve always wanted and now it is mine.”

If you want to purchase it, follow this link.