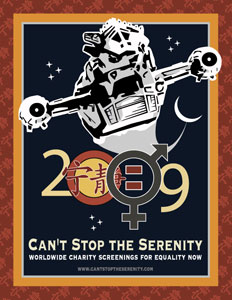 It’s June 2009, and that means it’s time to get underway with the “Can’t Stop the Serenity” worldwide screenings to benefit Equality Now, a program that is near and dear to Joss Whedon, creator of the series Firefly and its feature film followup, Serenity.

Equality Now was founded in 1992 to work for the protection and promotion of the human rights of women around the world.

Through its Women’s Action Network of concerned groups and individuals around the world, Equality Now:

Joss’ mother helped found this organization, and as a birthday present to Joss, Can’t Stop the Serenity holds these screenings every year to help raise money for Equality Now.