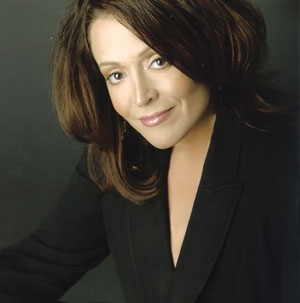 With a name like Marlene Forte, one can only expect to meet a woman of great strength and determination armed with a wicked sense of humor and blessed with that certain fiery Latin charisma. And indeed, Marlene wears her moniker quite well. Why? Simply because she has, against all odds, climbed her way to the top one tour de force at a time!

The talented Cuban native has carved her path in front of the cameras in a rather unconventional way: backwards, upside down and in reverse, yet always and still proving that acting is certainly her forte!

Now readying to embark on a stellar galactic enterprise gracing the silver screen as the first Latina “Chief Transporter” in the JJ Abrams blockbuster feature film “Star Trek”, Forte is successfully making noise as a “working” actress’ breaking Hollywood stereotypes of not only Latino characters but as well as a forty-something actress!

One character at a time Forte is refining the formula to proving Hollywood wrong and setting the standard and pace for a more inclusive future looking beyond race, gender, nationalities and sexual preference.

She sits comfortably at the top of her 40-something years of age and is enjoying a hell of ride carrying now an acting dossier that may very well rival some of the most prominent Latinas in the industry. Often called the Latina Diane Lane, she has certainly been keeping quite a busy schedule lately. Juggling between the small and the silver screen, she is undeniably a rising star on a trek full of Forte’tude!

With current roles in Tyler Perry’s TBS Sitcom “House of Payne” playing the modern-day Jeffersons and her role in Star Trek, Marlene’s fiery Latin heritage doesn’t even begin to capture the extent of her resilience!

The road less traveled has proven to be the path to success for Forte, who let thirty years of her life elapse before deciding to follow her dream. In the meantime, she accomplished everything established actresses do after propelling themselves into the big sky called “stardom”.

And even during these pre-Hollywood years, Marlene managed to take on a series of stellar roles! She is the little girl who at ten years old graced the stage of her school in a unique rendition of the classic “A Christmas Carroll” as part of the prologue that the production team wrote to create additional roles; she taught aerobics at the defunct Toby Coburn Fashion Institute in New York; who got married and gave birth to her daughter at twenty; who divorced at twenty three and courageously ventured herself into the world of entrepreneurship by running her own video store in West New York, New Jersey, during the pre-Blockbuster era; who turns her video outlet into a porn store for a Robert Altman production entitled “The Streets”, hoping in vain to meet the director and to get her first big acting break; and who after six solid successful years as a video store owner turns herself into the female version of a Quentin Tarantino, with an encyclopedic knowledge of films, directors and actors.

She is also the kind of person who upon turning thirty, decides that now is the right and only time to focus on her passion, and moves to New York to pursue her acting career. As foolish and naïve as it may seem, Marlene did not go against her better judgment!

Forte is one of those rare talents who dedicatedly continue to set a standard in Hollywood. She is continuously breaking through Hollywood’s stereotypes, helping carve a niche for the Latino community and tearing down the walls of “ethnic minorities”.

Highly involved in the Los Angeles Latino community, she recently put on a new hat as the creative director of the famed Theater Group, Company of Angels — headquartered at the legendary Alexandria Hotel in Downtown LA and celebrating its 50th Anniversary this coming October. Joining the Company of Angels was an organic move for Forte who is credited as being one of the 13 original members of the prestigious LAByrinth Theatre in New York among other luminaries such as Oscar winner Philip Seymour Hoffman, David Zayas, Stephen Adly Guirgis, John Ortiz, Judy Reyes and Garry Perez.

As the oldest non-profit professional theater in Los Angeles, Company of Angels reflects and responds to the richness, diversity and complexity that constitute the City of Angels. As the creative director, Forte will continue her effort to make the theater function as a town hall where ideas are shared and differences as well as similarities are celebrated. Marlene’s philosophy as well as that of Company of Angels is to create a theater that is deeply connected to its community.

Last year, she set another record co-starring in one of the lead roles in the Lifetime Television Movie of the Week called “LITTLE GIRL LOST: THE DELIMAR VERA STORY” – it was the #1 most watched movie on Lifetime Television according to Nielsen ratings. The “based on a true story” movie featured an ensemble cast of acclaimed Latin actors, including Judy Reyes (“Scrubs”), Anna Ortiz (“Ugly Betty”), Hector Luis Bustamente and A. Martinez. She also recently made her filmmaking debut, directing a series of webisodes for Latina Magazine starring her long time friend actress Judy Reyes.

Indeed, the story that lies behind Marlene Forte’s Hollywood success unfolds like a rags-to-riches movie script, but it is certainly a story rarely told and nothing short of inspiration and “Forte’ Tude”! The Cuban American immigrant, former teen mom and self-made business entrepreneur is the living proof that it’s never too late to follow your calling!