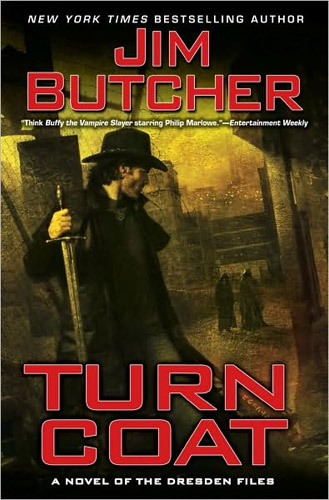 The eleventh installment of the Dresden Files, “Turn Coat” is another best-seller for Jim Butcher’s urban-fantasy series. “Turn Coat” debuts at number ten on the USA Today Best-Seller list for this week.

The novel went on sale last Tuesday and according to Barnes & Noble’s Bob Wietrak, “Turn Coat” “blew out of the store on the first day, and we had to reorder.”

The series began in 2000 with the publication of “Storm Front.” According to USA Today there are more than 3.3 million copies of the Dresden Files novels in print.

Butcher has said the series will run 20 books about various cases for wizard/private investigator Harry Dresden before finishing with an epic three-volume series that ties together the various plot strands from the series into one apocalyptic battle royale.

Butcher recently appeared on Farpoint Media’s Cover to Cover discussing the latest installment in the series.  You can hear the episode here.