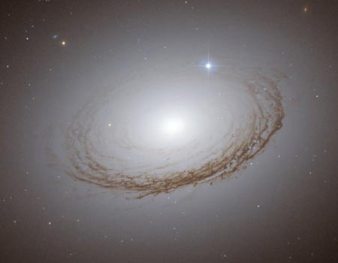 It is very large with an alternating spiral to elliptical shape, obscured by dense cloudy dust and looks strangely familiar. What is it? The NGC 7049 galaxy, dubbed “Crown of Thorns” because of its eerily look-a-like to the crown of thorns pushed down on the head of Jesus of Nazareth 2000 years ago.

The Crown of Thorns is located in the southern constellation known as Indus and is one of the brighter cluster of galaxies (BCG’s) so far photographed by Hubble.

Composed of uncounted stars, space dust and debris, it is quite an amazing and beautiful site. These type of BSGs are normally much older and quite large compared to their younger brethren, such as our own Milky Way Galaxy, which is a baby in age by comparison.