Beam Aboard Starship Farragut for a TREK in Georgia!

WASHINGTON, DC — Starship Farragut, an independent film project based on the original series of Star Trek, announced the hosting of an Open House Event on April 17th from 10 AM to 4 PM at its new filming studio just off the corner of Church and Osborne Streets in St. Marys, Georgia. This event is open to the general public and will be a great opportunity to mingle with the cast and crew of Starship Farragut, as well as other fans and enthusiasts from all over the country and be among the first to see Farragut Films’ new soundstage and sets. 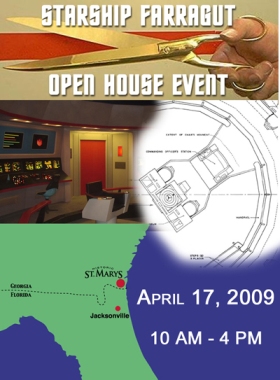 There will be a ribbon cutting ceremony with VIPs of the Historic St. Marys’ community and set tours of the Starship Farragut. Attendees will be able to stand in the transporter room, sit in the Captain’s chair or at the Helm/Navigation console, climb aboard the shuttlecraft, walk into a turbolift, and sneak into the Captain’s quarters. There will be photo opportunities and autographs with the actors, so bring your cameras. Refreshments will be available for a nominal donation to help defray costs.

The producers of Starship Farragut would like to acknowledge the contributions of Bill Gross of W.H. Gross Construction Company, Kimberly Watson of Prudential Magnolia Realty, the Town of St. Marys, and the donations of many of our fans, all of whom have had a hand in making this possible.

For anyone traveling to St. Marys from out of the area, there are many local accommodations that are very reasonably priced including some very clean and comfortable cabins at Crooked River State Park, which is only five miles away from the studio where the open house is being held. If you prefer to stay in a hotel, there are numerous comfortable, affordable places in St. Marys and Kingsland all within a ten mile radius of the studio’s location. If you are flying in to the area, St. Marys is only a 30 minute drive from the Jacksonville airport (JAX), going north on I-95. For INFO, please visit: http://www.stmaryswelcome.com/.

Help usher in a new and exciting era and for all who support Farragut Films. If interested in attending, please RSVP to Holly Bednar at hbednar@starshipfarragut.com with as much advanced notice as possible.

For those in the media who wish to attend for possible news coverage, please contact John
Broughton at jbroughton@starshipfarragut.com for getting on the press list. Press badges will be available to those in the media, and they will be allowed exclusive access to view Starship Farragut being filming on Saturday, April 18th (closed set for the general public).

Last year, Starship Farragut’s second film, “For Want of a Nail” won “Best Fan Film of 2008” at the Wrath of Con film festival in Panama City Beach, Florida. Recently, the third and fourth film efforts, “Just Passing Through” and “A Rock and a Hard Place” were debuted at the University of Maryland’s Hoff Theater. With Stage I of set construction completed, Stage II of set construction (a full 360 degree bridge set) will be completed prior to 12/31/09. The project’s fifth and next episodic film will begin pre-production this fall with filming in early 2010 timeframe. In addition, NEO f/x’s production of Starship Farragut – The Animated Episodes will be released in the first half of 2009 and features the voices of the Farragut crew in addition to well-known Star Trek guest stars, such as Tim Russ, Chase Masterson, and Chris Doohan (son of James “Scotty” Doohan). The project’s films may be downloaded free at www.starshipfarragut.com.

About Starship Farragut:
Starship Farragut is an independent film series based on the original series of Star Trek. It is based on the crew of the U.S.S. Farragut, a sister ship of the Enterprise commanded by Captain Jack Carter. The premise of the series – a new ship, new crew, and new adventures. “These are the adventures of the Starship Farragut…” The Internetbased series is produced by Farragut Films, a non-profit corporation headquartered in Silver Spring, Maryland. For more information, visit www.starshipfarragut.com. Star Trek is the copyright of CBS/Paramount Television.

About Historic St. Marys, Georgia:
Escape to yesteryear, and immerse yourself in history*, romance and adventure. Historic St. Marys’ enchanting storybook setting on the St. Marys River beckons with white picket fences and charming Victorian Inns. Majestic magnolias and stately live oaks. Fragrant salt air and alluring waters. Quaint shops and captivating cafes. Intriguing history and gentle people. Come discover legends of forgotten battles and daring pirates. The sweetness of honeysuckle and the succulence of our native rock shrimp. Serene sunrises and stunning sunsets. Discover wild
horses and armadillos and sea otters. You may even discover yourself. Come see why so many visitors are spellbound to return—some for a day, many for a lifetime. And discover why our visitors often say, “you may leave St. Marys, but St. Marys will never leave you.” — for
more details, please visit: http://www.stmaryswelcome.com/historycvb.html.

About W.H. Gross Construction Company:
The W.H. Gross Team has built their success on the philosophy of carefully observing their customers’ wants, needs and budgets. W.H. Gross provides the best quality craftsmanship and low-maintenance building techniques on every home to provide years of enjoyment for you and your family. All W.H. Gross homes are conveniently located in beautiful communities in southern Georgia and northern Florida, with easy access to Cumberland Island National Seashore, and Jacksonville. If beautiful beaches, boating and golf are among your priorities, W.H. Gross has just the home for you. Visit — http://www.whgross.com/.

About NEO f/x:
Established in 2003, Portland, Oregon-based NEO f/x offers its clients the creation and production of original imagery for projects such as logos, corporate presentations, print, television, film, DVD, and the Internet. The company specializes in visual effects work in the areas of 3D animation, otherwise known as CGI, along with compositing, editing, and conceptual design and consultation. In addition to visual effects, NEO f/x also has Total Media Packages
available to its clients for ‘one-stop shopping’ for their multimedia projects. Please visit their internet site at www.neo-fx.com.