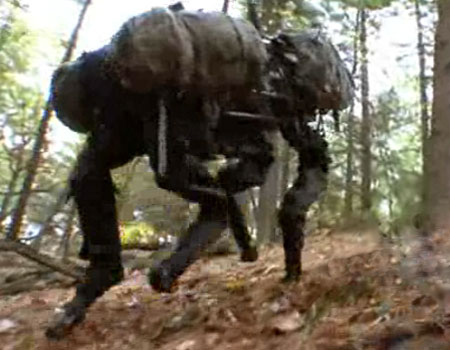 The U.S. military would like to introduce it’s latest in Star Wars technology, a little something Uncle Sam calls the “BigDogs”.

These robotic monsters with its array of big guns and mountain-climbing ability will soon be released on the Taliban and terrorists hiding out in their Himalayan hideouts and caves in Afghanistan. A four-legged robot can go where humans fear to tread and in the future could be used to bring down any target, as well as, transport a whole load of supplies by the hundreds of pounds to remote locations where American and allied soldiers may be deployed or dug in for battle.

The “BigDogs” are controlled remotely and has an extensive and complicated computer brain with animal-like legs, a laser-guided senors and state-of-the-art shock-systems and articulating legs and feet. It normally runs on gasoline but plans in the future are for it to be able to deploy solar shields and powerup using the sun should its gas supply run low.