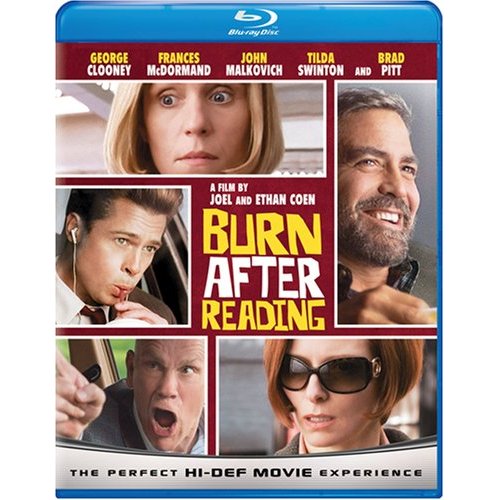 One of my favorite films from 2008, “Burn After Reading” is a cinematic joy. Coming off of their big Oscar win, The Coen Brothers latest picture is sure to make their new fans irate as they abandon their highbrow Academy work for their trademark inane dialogue and characters. What’s more, “Burn After Reading” is by far one of the brother’s riskiest films yet, as it is a simple exercise in their ability to make an uproariously entertaining movie without any semblance of a narrative thread.

With a star-studded cast that includes George Clooney, Brad Pitt, Tilda Swinton, Jon Malkovich, Frances McDormand, Richard Jenkins and J.K. Simmons, Burn After Reading shows how a simple CIA snafu can escalate into a murderous plot of deception, lies and deceit. Involving everyone from government agents, nymphomaniacs and personal trainers, the plot continues to thicken as the body count keeps growing.

While most filmmakers will tell you that a premise drives the story, “Burn After Reading” gives that theory the finger, spits in its eye and defies the norm. Can an elaborately complex plot really emerge from a series of small misunderstandings? Absolutely, and “Burn After Reading” relishes in that fact. The story is driven not by a motive or action, but by greedy, small-minded characters whose goals, ambitions and circumstances put them in grave danger.

Now on DVD and BluRay, “Burn After Reading” offers a few behind the scenes clips, with an entertaining highlight showcasing the reunion of Joel and Ethan Coen with longtime collaborator George Clooney, but like most Coen Brothers’ discs, the extras are disappointingly light. While Focus Features and Universal Home Entertainment have done a bang up job with the audio and visuals, anyone looking for any more substance behind the scenes then there was on screen is likely to be disappointed by the extras too.