Thoroughly entertaining from start to finish, Role Models is comedic ingenuity at its best 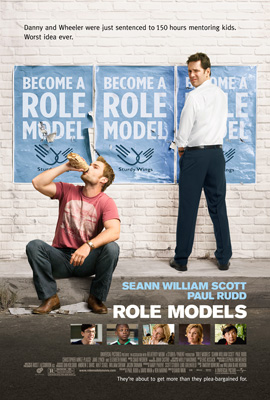 David Wain is a fascinating director. Up until now his features have been hit or miss feeling more like highly polish stand up comedy sketches then an actual narrative. Granted I’m a sucker for his cult classics like Wet Hot American Summer, but even I can admit it’s not the most cohesive of stories. That’s what is so refreshing about his latest film, Role Models. Wain has made an endearing, yet surprisingly straightforward narrative that manages to retain his strong, unique filmmaking voice.

Danny (Paul Rudd) is having a really bad day. After an embarrassing 10th Anniversary party at his tired job, thrown by his deadbeat coworker Wheeler (Seann William Scott), Danny is dumped by his girlfriend Beth (Elizabeth Banks), which sends the depressed energy drink promoter spiraling out of control. After a series of unfortunate events, both Wheeler and Danny find themselves looking at either prison time or community service at a Big Brother mentorship program. What initially seemed like an easy wait out of jail takes a turn for the worse as Danny and Wheeler discover they were assigned the two most difficult kids in the group.

Nurtured by experienced producer Scott Stuber and veteran comedy cinematographer Russ T. Alsobrook, Wain’s aggressive visual style is far more structured in Role Models, allowing the thorough script and fantastic performances do the comedic heavy lifting, rather then the camera. While both Paul Rudd and Seann William Scott deliver outstanding performances, the obvious scenes stealers are youngsters Bobb’e J. Thompson and Superbad superstar Chrispher Mintz-Plasse. Consistently hilarious, the interactions these four characters share are as surprising as they are funny. Watching how Wain connects them all, building their relationships to an unforgettable finale shows just how far the filmmaker has come as a storyteller.

That isn’t to say Wain has forgotten his roots. Fans of his previous efforts will not only notice veteran actors like Rudd and costar Elizabeth Banks, but Wain’s unique ability to make the mundane extraordinary. Like his unforgettable twist on summer camp, Wain has tackled the world of “Dungeons and Dragons”, bringing the underground culture to life in a hilarious, and surprisingly well choreographed, way.

Thoroughly entertaining from start to finish, Role Models is comedic ingenuity at its best. For a coming of age film, David Wain has certainly proved that as a filmmaker, he too has done quite a bit of growing up, and we will only laugh harder because of it.