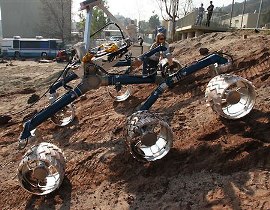 NASA has already invested nearly $1.5 billion (USD) into its next planned Mars mission and all of that money could end up getting sucked into that gigantic black hole called the Congressional Budget. With a projected overun of more than 30 percent above budget, deep cuts are likely in NASA’s spreadsheet.

“The magnitude of the increases has been mind-boggling,” said geologist John Mustard. “It has sent a shock wave to the Mars program and beyond to the planetary community.”

We could know by the end of this week if NASA will be forced to scrap its SUV-sized Mars Science Lab, the first of its kind to be powered with nuclear energy. The rover is designed to cover a lot more territory over a short period of time. If given a go, the rover will drill into rocks and dig even deeper into the Martian soil looking for active life, or at least evidence that it once existed a long time ago.

If Congress cuts off funding, NASA, an arm of the U.S. government, could be forced into the unprecedented position of trying to find funding from private or commercial sources if the space agency wants to keep on its planned 2009 launch schedule. The other problem with a delay is the longer NASA is forced to wait the more expensive the enterprise becomes.

Most of the scientists involved with the project are upset that a cut or delay in the project is even being considered by Congress since the agency has already poured so much money, man hours and sweat into it. They claim it would be the ultimate in wastefulness on the part of Congress.

“We’ve got to continue our exploration of Mars, but in a way that’s rational and sensible,” said Frances Bagenal of the University of Colorado.