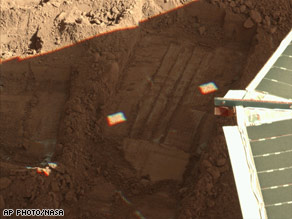 According to a NASA spokesperson, the Phoenix Lander on Mars has not only discovered evidence of past water at its landing site, but also watched falling snow for the first time since it touched down on the surface of the Red Planet for its 3-month exploratory mission.

Recent soil experiments revealed the presence of two minerals, calcium carbonate and sheet silicate, that are formed in liquid water, specifically in limestone rock and chalk. However, scientists are still unsure how the formation exactly occurred.

“It’s really kind of all up in the air,” stated William Boynton, a mission scientist at the University of Arizona at Tucson to the Associated Press.

The Phoenix did detected snow falling from clouds more than two miles above the surface but by the time the crystals reached ground level they had already dissipated without accumulation.

With the discovery of water, in the form of frozen ice below the first few centimeters of topsoil, and now the falling of snow, the likelihood of microbial life at one-time, or perhaps even now, existing on the planet is no longer a remote possibility, but very likely. The Lander’s equipment also found that the soil was slightly alkaline and contained important nutrients and minerals, however, the basic carbon building blocks of life have yet to be discovered.

“Is this a habitable zone on Mars? I think we’re approaching that hypothesis,” said chief scientist Peter Smith of the University of Arizona. “We understand, though, that Mars has many surprises for us and we have not finished our investigation.”

Due to the many surprising discoveries, the most recent being the snowfall, NASA has extended the Lander’s 3-month mission to extend through the end of the year, assuming Phoenix can survive through the harsh Mars winter in the northern hemisphere.