[Hundreds of distant clusters (white) seem to be moving toward one patch of sky (purple ellipse. — NASA/WMAP/A. Kashlinsky et al.]

As if the mysteries of dark matter and dark energy weren’t vexing enough, another baffling cosmic puzzle has been discovered.

Patches of matter in the universe seem to be moving at very high speeds and in a uniform direction that can’t be explained by any of the known gravitational forces in the observable universe. Astronomers are calling the phenomenon “dark flow.”

The stuff that’s pulling this matter must be outside the observable universe, researchers conclude.

When scientists talk about the observable universe, they don’t just mean as far out as the eye, or even the most powerful telescope, can see.

In fact there’s a fundamental limit to how much of the universe we could ever observe, no matter how advanced our visual instruments.

The universe is thought to have formed about 13.7 billion years ago. So even if light started travelling toward us immediately after the Big Bang, the farthest it could ever get is 13.7 billion light-years in distance.

Scientists discovered the flow by studying some of the largest structures in the cosmos: giant clusters of galaxies.

These clusters are conglomerations of about a thousand galaxies, as well as very hot gas which emits X-rays.

By observing the interaction of the X-rays with the cosmic microwave background (CMB), which is leftover radiation from the Big Bang, scientists can study the movement of clusters.

The X-rays scatter photons in the CMB, shifting its temperature in an effect known as the kinematic Sunyaev-Zel’dovich (SZ) effect.

This effect had not been observed as a result of galaxy clusters before, but a team of researchers led by Alexander Kashlinsky, an astrophysicist at NASA’s Goddard Space Flight Center in Greenbelt, Md., found it when they studied a huge catalogue of 700 clusters, reaching out up to 6 billion light-years, or half the universe away.

They compared this catalogue to the map of the CMB taken by NASA’s Wilkinson Microwave Anisotropy Probe (WMAP) satellite.

They discovered that the clusters were moving nearly 2 million mph (3.2 million kph) toward a region in the sky between the constellations of Centaurus and Vela.

This motion is different from the outward expansion of the universe (which is accelerated by the force called dark energy).

“We found a very significant velocity, and furthermore, this velocity does not decrease with distance, as far as we can measure,” Kashlinsky told SPACE.com. “The matter in the observable universe just cannot produce the flow we measure.” 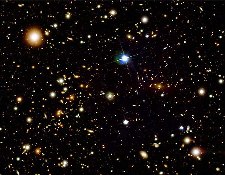 [Image on rt: The Bullet galactic cluster, 3.8 billion light-years away, is one of hundreds being carried along by a mysterious cosmic flow–NASA/STScI/Magellan/U.Arizona/D.Clowe et al]

The scientists deduced that whatever is driving the movements of the clusters must lie beyond the known universe.

A theory called inflation posits that the universe we see is just a small bubble of space-time that got rapidly expanded after the Big Bang. There could be other parts of the cosmos beyond this bubble that we cannot see.

In these regions, space-time might be very different, and likely doesn’t contain stars and galaxies (which only formed because of the particular density pattern of mass in our bubble).

It could include giant, massive structures much larger than anything in our own observable universe. These structures are what researchers suspect are tugging on the galaxy clusters, causing the dark flow.

“The structures responsible for this motion have been pushed so far away by inflation, I would guesstimate they may be hundreds of billions of light years away, that we cannot see even with the deepest telescopes because the light emitted there could not have reached us in the age of the universe,” Kashlinsky said in a telephone interview. “Most likely to create such a coherent flow they would have to be some very strange structures, maybe some warped space time. But this is just pure speculation.”

Though inflation theory forecasts many odd facets of the distant universe, not many scientists predicted the dark flow.

“It was greatly surprising to us and I suspect to everyone else,” Kashlinsky said. “For some particular models of inflation you would expect these kinds of structures, and there were some suggestions in the literature that were not taken seriously I think until now.”

The discovery could help scientists probe what happened to the universe before inflation, and what’s going on in those inaccessible realms we cannot see.

The researchers detail their findings in the Oct. 20 issue of the journal Astrophysical Journal Letters.

Written by: Clara Moskowitz for