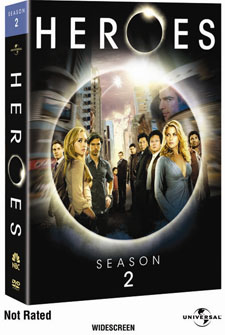 When NBC Universal asked if they could send me a copy of the 4-Disc Season Two DVD of “Heroes” to review, there was certainly no arm twisting on their part for me to say yes.

“Heroes” has proven over the last two years to never be short of unique plot twists, and the uncanny ability to somehow beautifully choreograph a large ensemble cast, with different stories and directions in their character’s lives, into a cohesive tale that never contradicts itself and keeps the audience excited and guessing all at the same time.

The Season Two DVD pack is a reminder of just how outstanding this show has become and the limitless heights that creator Tim Kring will still be able to bring to it.

All the episodes for the second season are a part of the DVD package and while it was fun watching them again and being reminded of some of the finer details of the episodes I had forgotten since the season finale ended, what really makes this DVD worth having in one’s collection is the extra bonus material.

Each disc contains three episodes, except for disc four which only has the final two of the season. However, each disc also contains deleted scenes from the various episodes on it, audio commentaries from the cast and crew and much, much more.

One of my favorite extras was a 5-part animated documentary titled “Takezo Kensei: Sword Saint,” which is narrated by the great actor John Rhys-Davies and gives the complete backstory of the legendary Japanese samurai that is Hiro’s idol in the series. There is also a background piece on who the series obliquely refers to as “the grandfather of the Internet” named Richard Drucker (“The Drucker Files”), and his place in the pantheon of Heroes. The discs also feature an NBC featurette called “Untold Stories,” which clues the viewer in on the lives of the some of the Heroes and tells aspects about them not seen in the weekly series, and a bonus feature titled “Heroes: Second 2-A New Beginning.”

But, one special feature that viewers of these DVDs will find especially helpful are the inclusion of all those deleted scenes. One of the only problems I had with Season Two when it aired on NBC was how it seemed to be a lot more choppy than it was in Season One. Scenes seemed to be cut short, or closed-out in such a way that seemed hurried. I understand why this had to be done, after all, the network has to pay the bills and with stories as intricately woven as “Heroes” is, sometime that chopped look is a sad by-product of advertisement placement. The deleted scenes included on the DVDs fill in those gaps excellently. We learn why Takezo Kensei, a.k.a. Adam Monroe, turned as viciously against Hiro, Yaeko and her swordsmith father as readily and brutally as he did. While the regular aired episode indicated that it was because he loved Yaeko and was upset when he saw Hiro and her kissing, the deleted scenes really show just how much Takezo did love her and relayed quite well the depth of betrayal he felt that Hiro had committed against their friendship. Those cut scenes, and others like it, really helps the viewer to better understand just how bruised and vindictive Adam had become over the last 400 years and why he was so intent on using the virus to destroy nearly all of humankind.

The final part of this DVD release was the real shocker. It appears that the aired final episode cliff-hanger wasn’t the originally planned one, but what we all saw was an alternate ending that became necessary due to the writer’s strike that hit the show while in production and was the cause for there only being 11 episodes for the entire second season. We all remember the aired season finale had Peter catching that glass vial of virus before it shattered to the floor and then using his ability to create intense heat to destroy it. The originally planned ending was to be much darker. I won’t spoil it for you in this review because I want everyone who gets this DVD to be as shocked as I was. But let me say, you will likely do as I did and just go, WOW!

“Heroes Season 2” will be available for purchase beginning Tuesday, August 26, 2008. Should you buy it? I can tell you in one word — ABSOLUTELY!