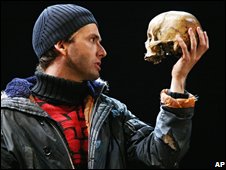 Critics and fans alike love David Tennant as Doctor Who, some even going to far as to say his performance of the famous Timelord is almost as perfect as the legendary Tom Baker. However, when it comes to his on stage work for an equally famous character, Hamlet, it would seem the critics are split.

The actor got to show a broader range of his thespian chops during the press night for Shakespeare’s “Hamlet” at the Royal Shakespeare production in Strafor-upon-Avon. He also got to work with one of the greatest living Shakespearean actors of the 21st Century, Patrick Stewart, who is starring as Claudius, Hamlet’s uncle.

To show the dispersant range of reviews The Guardian called Tennant the “best Hamlet in years” while the Daily Express gave the play three stars, describing it as “disappointing,” according to Wednesday’s BBC News.

All critics however, agree that Stewart’s performance is magnificently flawless.

Some other members of the press who were at the performance call Tennant’s Hamlet “a sarcastic Hamlet, a selfish Hamlet, a Hamlet very much for our self-indulgent age”. Another was quoted as stating Tennant gave a “spirited but unripe” rendition.

Paul Callan of the Daily Express wasn’t so kind and called Tennant’s on-stage act as being “somewhere between One Flew Over the Cuckoo’s Nest and The Goon Show”. However, he did admit that the actor’s “near-whispered delivery is sensitive and polished”.

After all the reviews are tallied it would appear that the scale favors Tennant ever-so-slightly and with several months to go in the actual production, his version of Hamlet will no doubt capture the audience — let the critics be damned!