“While there are certainly some entertaining moments, For the most part, this grindhouse biker flick leaves viewers in the dust.”

A grindhouse picture is arguably best defined as a self-serving genre film. Now one really must ask, does the movie exist to serve the niche fan base the film intends to reach or the filmmaker? In the case of Hell Ride, the first feature from writer/director/star Larry Bishop in over a decade, the picture exists to appease not only the filmmaker, but also the financial pocket of the film, Quentin Tarantino. While there are certainly some entertaining moments, For the most part, this grindhouse biker flick leaves viewers in the dust. 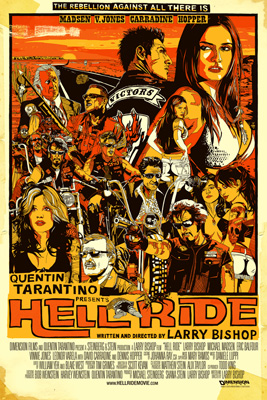 When rival gang, The 666, comes aggressively searching for the prized possession of Pistolero (Larry Bishop), the president of the Victors turns to his most loyal companions, The Gent (Michael Madsen) and Comanche (Eric Balfour) to preserve a promise that has been upheld for thirty-two years. However the venomous Billy Wings (Vinnie Jones) is out for blood, and quickly turning Pistolero’s comrades against him.

While the film itself is filled with talented, bad-ass actors, Larry Bishop seems to be the only star who just doesn’t fit in. While there are moments when the campy dialogue and attitude do work for the actor, for the most part Bishop is the sole performer who is unconvincing as the unflinchingly cool motorcycle gang leader. To make matters worse, the way women seem to fall for Pistolero feels so phony and forced, it’s as if the writer projected one of his own sexual fantasies onto paper, like he was going to star in them himself. Oh wait, the writer DID write himself into these scenes! Silly me. To top things off, nearly every moment shared between Pistolero and the Victors sexy messenger, Nada, are the exact opposite of erotic, and just wait until you here her scream.

Though Bishop obviously had a reason to tell Hell Ride in the nonlinear, Tarantino style, the pay off for this decision is far too weak to merit the jerkiness of the timeline. The film continually flashes back and forth between 1976, and what Bishop is building to isn’t very subtle or surprising. The movie could have easily been told in order, and for the viewer, a tradition narrative might have been more rewarding.

What Bishop did do right was the casting. Not only does every beautiful starlet sizzle on screen, but Michael Madsen, Eric Balfour, Vinnie Jones, David Carradine and Dennis Hopper really make this flick one enjoyable ride. Each actor gets the lingo, masters the attitude and delivers the goods emphatically. Hopper in particular is given some of the biggest and brightest moments in the film, sure to make fans of Easy Rider extremely happy.

With its diesel attitude and its edgy style, Bishop still wasn’t able to hide all the production problems. Sometimes they are merely technical, like a shot of Carradine that is completely out of focus. Other times they are merely realities of the limited budget, such as the barren walls of a highway-side motel. Still, faults and all, Hell Ride is an entertaining throwback. If trashy, Tarantino-esque cinema is what you’re craving, then Larry Bishop delivers. Just don’t expect anything of QT quality in this self-serving grindhouse biker pic.