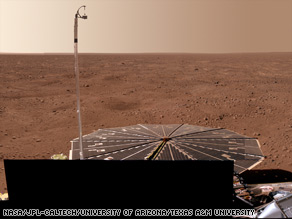 (CNN) — The Phoenix lander got its robotic arm onto a sample of water ice from Mars’ surface and popped the ice into tiny, onboard “ovens” that will help determine if the water could support life, NASA researchers said Thursday.

“We have water,” said Bill Boynton of the University of Arizona, lead scientist for the Thermal and Evolved-Gas Analyzer, the ovens that will cook the sample and measure the temperatures needed to vaporize the components.

“We’ve seen evidence for this water ice before in observations by the Mars Odyssey orbiter and in disappearing chunks observed by Phoenix last month, but this is the first time Martian water has been touched and tasted,” he said.

Controllers had been trying to get an ice sample into TEGA for weeks but struggled with a scraper and rasp on the probe’s robotic arm — items designed to grind the ice for study — Boynton said.

Ice stuck to the scraper and couldn’t be put into the analyzer. This week the team decided to use a scoop on the arm to dig up a sample of dirt and found it contained about 1 percent water ice, NASA researchers said.

The experiment will take nearly a week, and researchers will need three to four weeks to analyze the results, which will reveal whether organic chemicals are present, the space agency said.

Phoenix landed on Mars’ arctic plain in May. The Odyssey orbiter first reported in 2001 that the region was rich in water ice, mostly in the form of permafrost.

The Phoenix mission had been scheduled to end in late August, but the space agency said Thursday it had added five weeks to the program.

“Phoenix is healthy and the projections for solar power look good, so we want to take full advantage of having this resource in one of the most interesting locations on Mars,” Michael Meyer, NASA’s chief Mars exploration scientist, said in a statement posted the program’s Web site.