The little northwestern town where the most intelligent people in the world live and create the wondrous marvels of future technology is run by a Sheriff with an average I.Q., but who has the most common-sense of anyone living there. 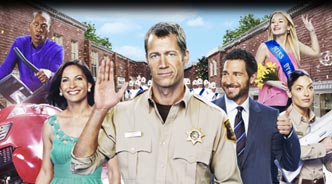 “EUREKA” Returns Tuesday July 29 at 9/8C: Washington sends a “fixer” to make sure the residents are being productive citizens. Due to some government budgetary cuts they will now have to help pay their own way by creating products that can be sold on the open market.

The SCI FI Channel hit series stars Colin Ferguson (Sheriff Carter), Salli Richardson, Joe Morton, Jordan Hinson, Erica Cerra and Ed Quinn. The show has a very strong supporting cast that includes Neil Graystone, Francis Fisher joins the cast this season as Eva Thorne “The Fixer, Matt Frewer and Niall Matter. Of course the other star of the show is Sheriff Jack Carter’s house, S.A.R.A.H., who will be in for some exciting changes this season.