“Peter Berg has indeed taken Hancock to artistic heights that it may have never reached with a less ambitious filmmaker.” 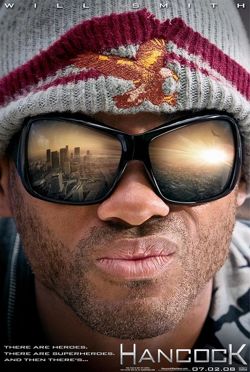 Perhaps too melodramatic for its own good, Peter Berg’s Hancock manages to balance big summer thrills with an immense sense of humor and dramatic tension. The one thing working against this superhero flick with a twist? The lack of a big, climactic battle takes this already out of the norm comic-book movie and plays the finale against audience expectations.

John Hancock (Will Smith) is Los Angeles most notorious superhero. While the booze ridden, poorly dressed and filthily clothed hero uses his powers to reluctantly fight crime, the collateral damage that comes with his heroics has turned the city against him. After saving the life of a PR consultant, Ray Embyry (Jason Bateman), the publicist decides to help the titular hero win back the favor of the public through a careful reimaging, despite the constant disapproval of his wife, Mary (Charlize Theron).

Despite its tumultuous preproduction, sifting from director to director, Hancock is very much a film that reflects not only Peter Berg as a filmmaker, but as a person. The laid back personality of Berg completely matches the opening tone of the picture. For “Fresh Prince of Bel Air” fans, this is the big screen, wise cracking Will Smith you’ve been waiting for.

The first half of the picture is filled with big laughs as Smith’s Hancock rudely interacts with both criminals and civilians. While this humor certainly mirrors Berg’s prankster-like personality, the quieter moments in the picture, where Hancock peacefully stares upon the Pacific Ocean, certainly embody the physicality and adventurous spirit of the filmmaker too.

Of course with a Peter Berg film comes three notable traits, a strong Michael Mann influence, abrupt and intense human drama and loose camera work. While hardly an important facet to the overall, on screen story, keep an eye out for longtime Berg collaborator, Michael Mann, who also produced the film, as he makes a brief cameo as a pharmaceutical executive.

Berg, a perpetual student of Mann’s body of work, also has the same innate instinct to find visceral performances from his actors. However, this will arguably surprise most audiences, perhaps for the worst, as Hancock is a silly superhero film that quickly turns quite serious.

While the previews do allude to a love triangle between Hancock, Ray and Mary, the extent to which this impacts the picture’s finale is not accurately portrayed. Rather than concluding with a special effects driven fight scene, Hancock relies on human drama to finish off the arc of the story. Similar in tone to the conclusion of Michael Mann’s Miami Vice, it will be interesting to see how general audiences react to this unusual finale for a movie billed as a summer blockbuster.

While Berg’s final trademark, his signature, shaky camera work, is again in full force with Hancock, the technique seems out of place in this effects laden film. Usually reserved to help create a sense of urgency and reality in a drama, thriller or actioner, handheld camera work is still uncommon in pictures that delve into fantasy. There’s a simple reason for it too, audiences want to be transported to another world, and fast moving, shaky camera work inhibits this process, drawing too much attention to itself for most viewers. While the technique does allow Berg to draw out excellent performances from Smith, Bateman and Theron, the stylistic choice will ultimately be the element that draws Hancock its biggest criticisms.

A refreshing twist to the summer blockbuster, Peter Berg has indeed taken Hancock to artistic heights that it may have never reached with a less ambitious filmmaker looking to cash in on a summer blockbuster. While the director could have easily coasted on Smith’s invincible box office draw to carry the film, Berg has indeed made Hancock his own picture. Whether you wind up loving or hating Hancock, at the least the movie isn’t called Tonight, He Comes anymore.