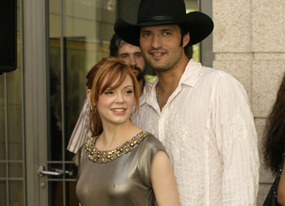 Actress Rose McGowan will be turning in a performance as Red Sonja for Robert Rodriguez’ new film adaptation of the comic book warrior, according to USA Today. [Pictured here together]

Rodriguez has been wanting to produce a remake of the film and believes he has found the perfect female lead in his girlfriend McGowan, who also starred in his Grindhouse film “Planet Terror.”

The new “Red Sonja” will begin filming early next year and is looking at sometime in 2010 for its premiere.

McGowan has just wrapped on the horror action film “Fifty Dead Men Walking” and will soon begin filming “Black Oasis,” a biopic about B-movie star Susan Cabot, who was murdered by her dwarf son in 1986.