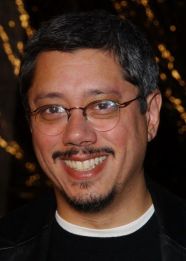 The TNT cable network and the Acura car company have hired Dean Devlin (“Stargate,” “Independence Day”) to produce what is being termed a “microseries” called “Blank Slate.” It will last for 80 minutes but be broken up into 20 different short segments. Scheduled air-date is for this Septmember.

Actress Lisa Brenner will headline the cast starring as an amnesiac who becomes part of an experimental FBI program dedicated to solving murders by “implanting memories of the recently deceased into the living.” Eric Stoltz (“Pulp Fiction”) and Clancy Brown (“Carnivale”) co-star.

Scribe John Harrison, who wrote the script will also direct.

“What we’re doing is drastically segmenting a TV movie so that instead of a three-act structure, we’ve created a 20-act structure,” said Devlin. “Harrison has had to write a cliffhanger on every fifth page of the script.”

“Blank Slate” will be shown on two consecutive Tuesdays and Wednesdays, beginning September 8, with TNT spreading out the series across five back-to-back episodes of repeats of “Law & Order” between the hours 8PM to 1AM. One short “Blank Slate” episode will play, in sequence, within each of the “Law & Order” hours, states the Variety trade paper.

Here’s the tricky part — Acura will not only sponsor “Blank Slate” on TNT and its website online viewing, but also will embed its vehicles within the episodes themselves as a hedge against DVR users’ fast-forwarding through the interstitial four-minute pods. However, the “Blank Slate” segments won’t include any other commercial interruptions. “We’re trying to cobble together the money,” Devlin said.

TNT will be working with Devlin for other projects as well, including 13 episodes of the new modern-day Robin Hood action series starring Timothy Hutton and Christian Kane called “Leverage,” which will kick off later this year, and the third TV-film for the Noah Wyle “Librarian” adventure franchise, currently in post-production.