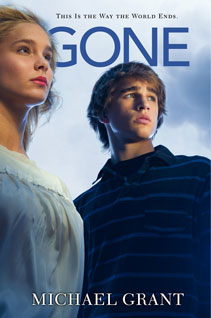 I must admit that when a representative for Michael Grant’s publisher asked me to read and review “Gone,” Grant’s latest Young Adult (YA) novel, I was less than excited. Why? I’m simply not a big fan of YA novels. Call it my age if you want, but even when I was a young adult (can I even remember back that far?) I wasn’t a huge fan. However, after barely getting through the first chapter of this exciting SF novel I was reeled in and found it near impossible to set down until completed.

Grant has successfully written himself a real suspense-filled saga about a group of small city kids placed in extraordinary circumstances and dealing with problems that would cause any well-seasoned and trained adult to go crazy.

“Gone” takes place in the small California coast town of Perdido Beach. Its main source of revenue is a nuclear power plant that supplies Perdido and much of the northern California coast with its electrical power. The town’s young people can roughly be divided between those average kids living in the town itself and a group of gifted, but troubled teens living just north of town atop a small cliff at Coates Academy.

One day, out of the blue suddenly, in a moment, in the twinkling of an eye, everyone in Perdido 14 and older simply vanishes, or as some of the kids called it “Poof!” Everyone 13 and younger are left behind, teens, middle schoolers, pre-schoolers, toddlers and babies. In the confusion the entire town looks to one unlikely hero named Sam Temple, age 13 and just two weeks short of his 14th birthday. They look to him for direction because it was Sam, just a few months prior who saved a whole school bus load of kids when the driver suffered a heart attach. Sam wants no part of leadership, however and that role is soon taken over by town bullies and eventually by the kids from Coates Academy, particularly a boy named Caine who possesses a unique power that allows him to exert control.

More than just people disappearing have changed in Perdido and its surrounding countryside. A huge dome-shaped translucent wall that burns the skin when touched has emerged closing in the town and its remaining residents, kids are developing strange powers and the animals are also mutating into dangerous enemies. Plus, hidden deep within an old abandoned gold mine lays something powerful and sinister known only as The Darkness.

The “Lord of the Flies” has nothing on “Gone” when it comes to watching these band of kids divide into groups, one led by Sam, Astria, Lana, Quinn and Edilio and the other more dangerous tribe headed by Caine, Diana, Drake, Orc and Computer Jack, as they begin to try and make something of a coherent society in the face of their fears, death becoming a daily reminder and having to deal with bullies and two-footed, as well as four-footed killers at every turn.

This terrifying new world has one more great mystery. When any of the remaining kids reach 14 years of age, they too just suddenly disappear into nothing. What awaits them? Freedom from what the kids call the FAYZ (Fallout Alley Youth Zone), a return to life before the FAYZ with their parents and teachers, or worse yet — Death?

“Gone” is one of the best books it has been my pleasure to read in almost two years, and I have read a lot of novels over the last 24 months. The ending, while leaving you hanging and twisting in the breeze, was perfect for the story and leaves it wide-open for Grant to bring a sequel to it sometime down the road.

On my scale of 0 to 5 stars: “Gone” by Michael Grant rates

“Gone” from Harper Teen Publishers will be on bookshelves beginning Tuesday, June 24, 2008. My recommendation is to get your copy as soon as possible and dig in for an exciting ride of suspense, mystery, intrigue and excitement.

Also — here is an exciting preview of the book: