“Indiana Jones is no longer a man of reason, who could be traversing the world right now hunting for lost treasures. He is complete fiction.” 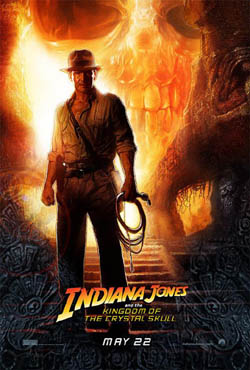 Indiana Jones and the Kingdom of the Crystal Skull is unfortunately quite a disappointment. Disappointing to the point of embarrassing for George Lucas and Steven Spielberg, the duo have taken a character of extreme popularity and a trilogy of great admiration and added an additional chapter of unnecessary absurdity. During an early scene, our capable hero survives a nuclear blast by hiding in a refrigerator, which is catapulted from the blast zone with deadly force. This momentarily excessive lack of realism is forgivable because he’s Indiana Jones. But the rest of the film becomes even more ridiculously farfetched and cannot as easily be brushed aside. Indiana Jones is no longer a man of reason, who could be traversing the world right now hunting for lost treasures. He is complete fiction.

It is 1957, and Professor Indiana Jones (Harrison Ford) is once again in the midst of peril, this time at the hands of Russian radicals led by Stalin’s Austrian psychic scientist Irina Spalko (Cate Blanchett). Forcing him to lead them to magnetized remains of some obscure creature in a government warehouse, Indy manages to escape to the safe-haven of a nuclear blast testing zone. Shortly thereafter, he is returned to the comfort of his classroom, to teach the seemingly boring topic of archeology.

Mutt Williams (Shia LeBeouf) catches up with the legendary adventurer to inform him that a colleague, professor Oxley (John Hurt), has been captured by Spalko, and is being pressured to lead the Soviets to the location of El Dorado, the city of gold, where a crystal skull has been stolen. The legend places the city in the Amazon, and claims to grant the retriever of the artifact unimaginable powers. Soon enough, Jones travels across the globe to South America to play a vital role in fulfilling the legend, and making sure to encounter every danger and every adventure imaginable along the way.

Kingdom of the Crystal Skull makes countless references and pays nonstop homage to the original Indiana Jones trilogy, and even brings back familiar characters such as Marion Ravenwood (Karen Allen). Indiana can still take a beating (more than any of the previous films), creepy crawling bugs frequently inhabit his locales, tons of comedy relief peppers the nonstop action sequences, and riddles, puzzles and buried treasure abound. Yet for all of its attempts to make this fourth outing a faithful addition to the already resolute Indy saga, too much of it is unfamiliar. Indy is older and noticeably more weathered, but what feels the most inconsistent is his ability to continually achieve more and more outrageous feats. While most of the action scenes are standard high-speed pursuits, his endeavors to brave raging waterfalls, nuclear blasts, and armies of ants, (plus an even more far-fetched conclusion) just doesn’t feel like the flesh and blood Indy we grew accustomed to in the original trilogy.

Everyone’s favorite archaeological adventurer has tackled everything from the Nazis and their steel beasts to booby-trap-filled temples of doom and lost arks of unimaginable power; so what’s left for him to do? Unfortunately the creative minds behind Dr. Jones’s escapades seem to have run out of ideas and reverted to both the ridiculously unbelievable and to creations extremely alien to Indy’s regiment of religious history. The Russians have replaced the Nazis, the outlandish has replaced the reasonable, and the extraterrestrials have replaced Jesus.