“As the children mature, so do the Shakespearean themes and tone of this darker follow-up.” 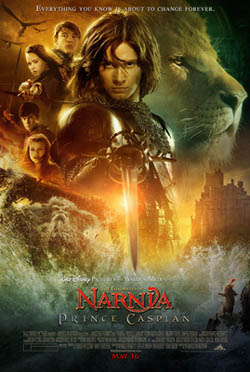 Prince Caspian is every bit as entertaining as the first film in the adaptations of C.S. Lewis’ The Chronicles of Narnia. The action sequences and special effects continue to exponentially improve, but the plot remains haplessly repetitious. While Lewis may have created countless original ideas in his novels, the movies themselves have already been beat to the punch by The Lord of the Rings, Harry Potter, Shrek and many others, causing Prince Caspian to feel like it’s borrowing elements from other fantasy fare. Entertaining but predictable, this sequel is an admirable second chapter to the Narnia saga that is sure to win over fans old and new.

Only a few years have passed in England, but thousands have drastically changed the war-torn lands of Narnia. When the heir to the throne, Prince Caspian (Ben Barnes), is betrayed by the scheming Lord Miraz (Sergio Castellitto), he inadvertently summons the kings and queens of old — Peter (William Moseley), Susan (Anna Popplewell), Edmund (Skandar Keynes), and Lucy Pevensie (Georgie Henley). Forming an allegiance with the scattered Narnians, Prince Caspian and the Pevensies (with the help of a little magic and a talking lion) must wage war against Miraz’s Telmarine army to once again restore peace to Narnia.

The story starts right up without pausing considerably to educate unfamiliar or forgetful audiences as to the origins of Narnia, or to the magical elements that affect the Pevensie children. While many will grow accustomed to Narnia’s paradisaical qualities, the children’s return, without the use of the wardrobe, is rather inexplicit. Along those lines, the mysteries surrounding Aslan’s apparitions, Lucy’s selective use of her healing serum, and the unharnessed powers of Mother Nature all bring questions to the film; most of which are not answered.

As the children mature, so do the Shakespearean themes and tone of this darker follow-up. Tragically, the biggest downfall to the fascinating world of Narnia and its engrossing inhabitants is the fact that nearly every idea has already been expended by other movies. C.S. Lewis may have crafted many of his creative elements years before Shrek or 300, but those movies beat Narnia to the big screen. Whether it’s Reepicheep, who is unappealingly similar to Shrek‘s Puss In Boots, or the Telmarine infantry, whose armored masks closely resemble 300‘s Immortal army, Narnia simply doesn’t feel original. It’s a shame that many viewer’s first encounter with the thaumaturgical inventions will be through the film and not the novels.

Despite a Lord of the Rings: Return of the King conclusion (a comparison that fantasy films should avoid), Prince Caspian indeed amps up the adventure. Better action, superior use of slow-motion and family friendly violence (such as a PG decapitation) aid in the film’s smooth pace and sustained action. A more savage, war-torn Narnia doesn’t necessarily make a better one, but new heroes and villains, nonstop epic battles, and a mature setting help keep the second Chronicles afloat in the heavily treaded waters of fantasy tales.