“The racing scenes are like Star Wars‘ podracing, without the realism… of which there is no realism.” 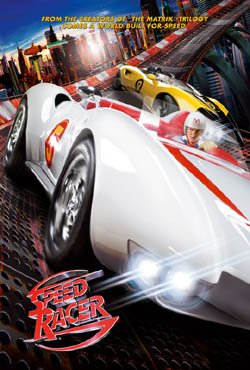 The instant the movie starts we’re introduced to a psychedelic world where fast cars reign supreme and the laws of physics have long been lost. A playground where the color spectrum has evolved (but not the weaponry) plays host to hyperkinetic and dizzyingly dangerous races where literally anything is possible — especially the impossible. The only thing faster than the cars is the speed at which realism flies out the door, but the Wachowski Brothers have managed to create yet another world unlike any other.

As a youth, Speed Racer (Emile Hirsch) could think of nothing but the thrill of driving and one day becoming just like his famous racecar driver brother, Rex (Scott Porter). His dreams are almost shattered when tragedy befalls his sibling, but fate intervenes and Speed eventually fulfills his lifelong goal of racing. But his skills catch the eye of nefarious entrepreneur Royalton (Roger Allam) who propositions the young racer with a dastardly ultimatum â€“ race for Royalton Industries or never race again. Determined to defy the scheming extortionist, Speed must face almost certain death in the most dangerous no-holds-barred race of all time — the Casa Cristo Classic 5000. But with the help of the mysterious Racer X, and the support of his family and girlfriend Trixie (Christina Ricci), the exceptional Racer might just be able to bring honor back to the sport he so loves.

Speed Racer takes the cake for being the most stylistic and unimaginably colorful film ever to grace the screen. Unfortunately, that’s the very reason that viewers may turn away from the famous anime-turned-movie. Utilizing more green-screen work than perhaps any other film to date, the backgrounds are almost completely computer generated, as are all of the fantastical racing scenes. New colors must have been invented for the film just to paint the psychedelically bright visuals, and by the conclusion, no law of gravity, physics, momentum, motion, or weight remains unbroken.

The racing scenes are like Star Wars‘ podracing, without the realismâ€¦of which there is no realism. Cars spin, bounce, jump, flip, and dance about with no respect for preconceived notions of believable vehicular movement. During the hazardous Casa Cristo race, all of the racecars are equipped with signature James Bond gadgets and weaponry — but in Speed Racer it feels like we’re watching a round of Crash Bandicoot racing instead of action-packed high-speed pursuits. It’s understandable that the creators wanted to portray a form of breakneck racing unlike anything witnessed on the big screen before, but the drivers are not superhuman; and yet every maneuver they incorporate into the roller coaster racetrack seems practical only for those with an acute understanding of The Force — or perhaps for cartoon characters.

And essentially Speed Racer is about as close to a live-action cartoon as it gets. Nothing remains within the boundaries of realism, and the maddeningly stylized editing further supports the idea that the characters are about as vulnerable to real life as a cartoon. Traditional animation is mixed into early scenes with Spritle (Speed’s younger brother) and his pet Chim-Chim (not unlike the opening scene of Son of Rambow, also out this month), scenes are overlayed onto one another with faces and characters sliding across the screen while the backgrounds remain motionless, and the familiar styles of anime fighting are realized in comically edited scenes of slow-motion, sped-up shots, and all methods of disorienting juxtaposition.

While the story is decent, the effects are outlandish, and the characters are basically nonsensical, ultimately, if you’re a child, there really is no reason to watch Speed Racer — and if you’re a teen, Trixie is about the only reason to view this astronomically unreal racing adventure.