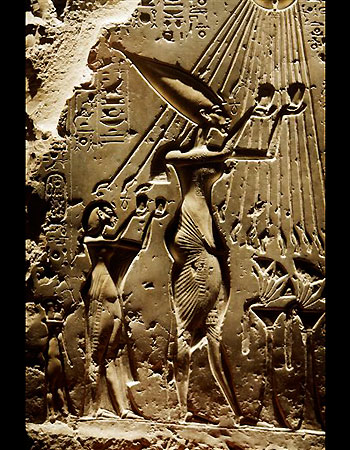 Akhenaten wasn’t the most manly pharaoh, even though he fathered at least a half-dozen children. In fact, his form was quite feminine. And he was a bit of an egghead.

So concludes a Yale University physician who analyzed images of Akhenaten for an annual conference Friday at the University of Maryland School of Medicine on the deaths of historic figures.

The female form was due to a genetic mutation that caused the pharaoh’s body to convert more male hormones to female hormones than needed, Dr. Irwin Braverman believes. And Akhenaten’s head was misshapen because of a separate condition in which skull bones fuse at an early age.

Braverman, who sizes up the health of individuals based on portraits, teaches a class at Yale’s medical school that uses paintings from the university’s Center for British Art to teach observation skills to first-year students. For his study of Akhenaten, he used statues and carvings.

Akhenaten (ah-keh-NAH-ten), best known for introducing a revolutionary form of monotheism to ancient Egypt, reigned in the mid-1300s B.C. He was married to Nefertiti, and Tutankhamun, also known as King Tut, may have been his son or half brother.

Egyptologist and archaeologist Donald B. Redford said he supports Braverman’s belief that Akhenaten had Marfan syndrome, a genetic disorder marked by lengthened features, including fingers and the face. [Marfan syndrome would not have been responsible for his feminine appearance, however.]

Visiting clinics that treat those with the condition has strengthened that conviction, “but this is very subjective, I must admit,” said Redford, a professor of classic and ancient Mediterranean studies at Penn State University.

Others have theorized Akhenaten and his lineage had Froehlich’s Syndrome, which causes feminine fat distribution but also sterility. That doesn’t fit Akhenaten, who had at least six daughters, Braverman said.

Klinefelter Syndrome, a genetic condition that can also cause gynecomastia, or male breast enlargement, has also been suggested, but Braverman said he suspects familial gynecomastia, a hereditary condition separate from Marfan syndrome that leads to the overproduction of estrogen and the development of breasts.

The Yale doctor said determining whether he is right can easily be done if Egyptologists can confirm which mummy is Akhenaten’s and if Egyptian government officials agree to DNA analysis.

Braverman hopes his theory will lead them to do just that.

“I’m hoping that after we have this conference and I bring this up, maybe the Egyptologists who work on these things all the time, maybe they will be stimulated to look,” he said.

Previous conferences have examined the deaths of Edgar Allan Poe, Alexander the Great, Wolfgang Amadeus Mozart, Florence Nightingale and others.