“Third-rate dialogue, third-rate acting, third-rate storytelling, and first-rate nudity accounts for all of the appeal of Zombie Strippers.” 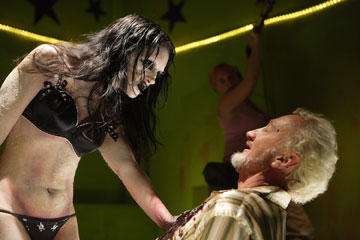 When a group of mercenary soldiers are called in to exterminate the threat of a deadly chemo-virus outbreak in a research lab, one of their own is exposed to the zombifying disease. To avoid execution, the renegade soldier escapes to a nearby strip club where disease-paranoid owner Ian (Robert Englund) manages a group of rivalrous strippers. Succumbing to the infection, the mercenary ends up taking a generous bite out of Kat (Jenna Jameson) and unpredictably the zombified stripper becomes an even bigger hit at the club. Realizing the monetary potential of zombie strippers, Ian exploits the resurrected girls — but things quickly get out of hand as the ravenous appetites of the undead strippers steadily diminishes the number of raving customers.

The film is also filled with plenty of humor, but of the kind that is largely hit-or-miss. Attempting to overload the audience with racial, religious, slapstick, pop culture and crass jokes, more often than not they simply don’t pack a punch. At one point the Mexican janitor Paco (Joey Medina) is seen armed to the teeth like Pancho Villa, bidding his mule farewell. Either you’ll find the scene humorous, or you won’t — the entire film can essentially be summed up in just that fashion.

All of the strippers engage in meaningless conversations about existentialism, fatalism, and other philosophical doctrines, probably in the attempt to satirize the events that unfold. But considering that so much time is spent simply trying to unsettle the audience, or showcase the physical talents of the nude pole-dancers, any meaningful cynicism is immediately lost. At least the gore, violence and prosthetics are all superbly portrayed — up until the computer animated blood erases all that hard work from our memories.

Third-rate dialogue, third-rate acting, third-rate storytelling, and first-rate nudity accounts for all of the appeal of Zombie Strippers. The film is made for a single distinct crowd, and promises entertainment only to those who expect nothing more than what was eluded to in the theatrical trailer.