“One of the worst movies of this, or any year.” 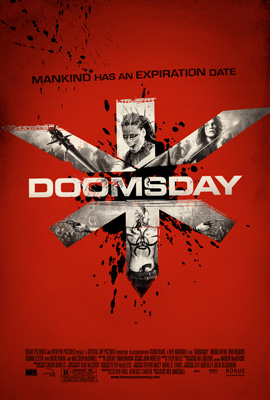 Perhaps Doomsday was a bad movie to start with. It had all the trimmings of one. With its campy, post apocalyptic story, the genre film was already a target of studio scrutiny. When Neil Marshall showed Universal his disjointed director’s cut the studio probably hit the panic button. The solution, gut the film so that it fits a running time of under a hundred minutes. The result is a product that can cram a large audience into theaters over opening weekend, but what they will ultimately find is one of the worst movies of this, or any year.

When an epidemic virus spreads across Britain, decimating the population, the government is forced to seal off the hot zone, sacrificing thousands of civilians to save millions. Nearly thirty years later the Reaper virus appears again, but this time in central London. With panic spreading throughout the masses, the government sanctions an elite military strike force to search the infected area for a cure. What lies waiting for the team is a small population of survivors ruled by sheer anarchy.

What made Neil Marshall’s last film, The Descent, so engaging was not the claustrophobic fear or special effects, but the exceptionally well told story. With fantastic character development for its genre, combined with an evenly paced plot, Doomsday pales in comparison to its predecessor. Calling Doomsday schizophrenic is an understatement. The film changes tone and styles repeatedly throughout the picture’s relatively short duration, never giving each moment time to develop.

Speaking of development, whoever chopped down the theatrical release of Doomsday managed to dissect the film so that it is literally an hour and forty minutes of pure action. While this might sound like a sugar rush of fun for action fiends, be warned, while Doomsday is a very good looking film, with gritty and vibrant cinematography, there is absolutely zero intensity in the events that play out on screen.

So with high speed car chases, cannibals and heavily armored knights all in the same movie, how could this be? The simple reason is that Marshall’s film never gives us any reason to care about the characters on screen. As Major Sinclair, Rhona Mitra gives an extremely monotone performance. Just because you’re playing an uber bad ass does not mean inflection should be negated. While the actress was quite striking visually in her tight, black spandex, the rationale for her character’s final decision is highly unmotivated.

Another important element that seems to have been ripped out of this cut of the film was a love story shared between the team’s doctor and the young girl that hosts the cure, Cally. We see the medical practitioner go to extreme lengths to protect Cally, however the only inkling of a romantic connection between the two comes when the love birds collide accidentally. Aside from this brief shot that lasts for only a handful of seconds, the audience is expected to believe in their connection for the remainder of the film.

Despite the character and story flaws though, at least the action and special effects play our well, right? Wrong. While there are a few bits of fun gore sprinkled lightly throughout the film, all other logistics are thrown out the window. Why the survivors of the plague have reverted to medieval weapons when army bases have been left open, ripe for pillaging, is beyond rationale. Why a high end Bentley cannot outrun a collection of beat up, sloppy jalopies will also raise doubts. How the very same car can go crashing through a bus, and come out completely unscathed is even more unfathomable.

Whoever managed to piece together the action scenes did an equally horrendous job. With little motivation to cut from one shot to another, and breaking nearly every editing rule in the book, the majority of the violence is so poorly compiled it is difficult to watch. To top it off, unmotivated camera moves, like snap zooms and angles shot upside-down, quickly draw the viewer out of the picture.

With two solid movies to his credit, one would like to think that the filmmaker who brought Doomsday to light is not the same director that created Dog Soldiers and The Descent. While this action flick might never have been a good movie, the obvious plot holes and horrendous film editing scream of a motion picture that has panicked studio finger prints all over it. One has to wonder if this theatrical release really is Neil Marshall’s definitive Doomsday, or like the Reaper virus, if the director’s cut will be quarantined for good.