“If you were excited by the trailer for 10,000 B.C., you’ll probably go see it regardless of how many ill words we can throw at it.” 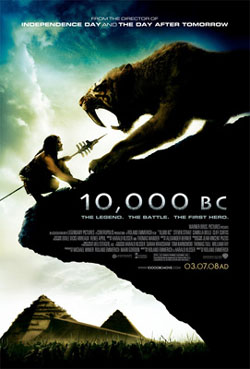 Far too predictable and constantly dragged down by plot holes and epic cliches, Roland Emmerich’s latest special effects extravaganza still showcases enough silly fun for those who can easily suspend their disbelief and don’t demand well-conceived characters. Basically, no one should like such a film, yet it’s still hard not to enjoy the sight of a herd of stampeding mammoths causing death and destruction.

The year is 10,000 B.C., and a remote mountain tribe of mammoth-hunters is attacked by a marauding group of slavers who capture Evolet (Camilla Belle), the promised wife to unwilling leader D’Leh (Steven Strait). Desperate to retrieve his beloved Eve, D’Leh embarks on a perilous mission across treacherous mountains, predator-infested jungles, and burning deserts, that will find him uniting several warrior tribes to overthrow the tyrannical leader of a lost civilization.

It’s as clear as white rain that 10,000 B.C. isn’t striving for any manner of authenticity in its portrayal of ancient anything. At best mimicking an Apocalypto in Egypt and at worst an inferior retelling of One Million Years B.C., Emmerich’s film attempts to shadow what could have been in “300: The Bedtime Story,” but sacrifices any true power and intensity with sappiness and stereotypes. The decision to have the protagonist’s tribe speak English may seem logical to entice the average moviegoer, but a careful examination isn’t required to find several contradictory and unnecessary narrations. In an attempt to feign authenticity, much of the dialogue feels contrived and pointless. Lines like “just try it” as a contemptuous retort just don’t belong in a pre-history epic.

Another area that betrays the film’s setting is the casting. Faces that are far too pretty and teeth that are way too white scream Hollywood, though this film isn’t exactly meant to be a history lesson. All of the primary cast do the best with the dialogue they’re given and Camilla Belle certainly looks like a prize worth chasing after, but don’t expect the energy or thrills of something like Apocalypto.

10,000 B.C. thrives on its CGI effects, and while not all it portrays is flawless or very realistic (as realistic as giant dodos and wooly mammoths can be anyway), what it attempts is still satisfyingly grand. Stampeding furry elephants, velociraptor-esque dodos and a not-so-mean saber-toothed tiger round out the brunt of the prehistoric creatures and much of their resulting action sequences do entertain. The most impressive special effects, however, belong to the long shots of gargantuan pyramids being constructed by thousands of scurrying people. When these massive monuments inevitably come crashing down, that’s pretty thrilling too. Quite a bit of creativity (though probably not much authenticity) went into the unique and varied costumes that adorn each tribe of warriors, as well as the enslaving tyrants who recall their majestic and garishly dressed counterparts in the earlier ancient tale, 300.

If you were excited by the trailer for 10,000 B.C., you’ll probably go see it regardless of how many ill words we can throw at it, and maybe you shouldn’t let a lack of story, character development, and realism stop you from enjoying a little mindless, guilty-pleasure, action-adventure fun. Well, maybe it should.