“The predicament Bartlett will face is finding its audience.” 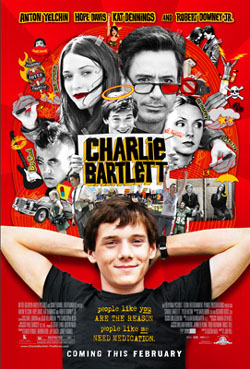 Alternating between serious drama and comic absurdity, Charlie Bartlett never settles on a consistent mood, which in turn mixes the messages it attempts to deliver. At times the comedy works well, and at others the heartfelt drama attains admirable poignancy, but as a whole the film never reaches an equilibrium that demands emotional participation. Bartlett is a passive movie, one that requires nothing from its audience, but also gives little. Not without an authenticity in portraying the habits and pandemonium of youth, it satisfies in the end with a feeling of accomplishment, but doesn’t offer the remembrance of a more emotional involvement.

Charlie Bartlett (Anton Yelchin) is a high school troublemaker, not one purposely out to cause mayhem, but one driven by his ceaseless quest to be needed. After being kicked out of every private school in the city, Charlie winds up at Western Summit Public High School where he immediately finds himself outcast once again. Ignored by the popular kids and bullied by the bullies, Bartlett devises a plan to garner the attention he desperately seeks. Working with bully-turned-business partner Murphy (Tyler Hilton), Charlie sets up a psychiatry office out of the boys’ bathroom and begins advising those with problems and prescribing pills from the limitless supply he acquires from his own personal shrink. Finding his calling by trying to fix others’ emotional predicaments, Bartlett seems to have finally attained the popularity he’s always wanted, but things begin to spiral out of control when the suspicious Principal Gardner (Robert Downey Jr.) starts to wise up to his games and young Charlie falls in love with Gardner’s daughter Susan (Kat Dennings).

Anton Yelchin turns in an enthusiastic performance as the soft-spoken Charlie Bartlett and creates as likeable a character as the script allows. His motives and excuses (he’s just a kid after all) often conflict with truly identifying with this rushed-into-adulthood, wanna-be psychiatrist, but when reality isn’t inexplicably working in his favor, his trials and triumphs garner a more deserved appreciation. Kat Dennings plays an adequate love interest but never surpasses the confines of her character’s stereotypes. Both young stars are outshone by the ever-entertaining Robert Downey Jr. whose quirky nature makes for a rather unexpected principal, but an engaging one nonetheless. Hope Davis also steals the scenes she appears in with her troubled-to-the-point-of-carefree-insanity wealthy mother that means well but lacks any parental disciplinary fortitude.

The primary downfall to Charlie Bartlett‘s comedy-drama structure is that it doesn’t balance the two genres with the realistic appropriateness required to sustain its more authentic approach to portraying high school life. Initially it attempts to be flat-out comedy, with the introduction of estranged characters, capricious high school shenanigans and general youth mischievousness – and then sharply shifts to serious drama. The predicament Bartlett will face is finding its audience. Teens that are attracted by the zany trailer will undoubtedly be disappointed by the time the anti-drug, anti-promiscuity singing montage occurs towards the conclusion, and adults won’t have the patience for the fantastical portrayal of adolescent angst. While some pieces may have general appeal, not enough of it can cater to one demographic adequately.

Charlie Bartlett retains the more realistic endeavors of misguided youth, but allows its comedic antics to constantly veer the film away from such studious precision. The majority of conflicts, while carefully realized, end up working in Charlie’s favor far too easily and the charming sincerity rapidly diminishes. Our protagonist overcomes adversity with hard work no doubt, but also relies heavily on the money readily available to him — something most other fictitious aspiring instigators must achieve without. It’s certainly easier to accomplish things when you’re rich, but such generous financing could have been overlooked had the alternating bouts of humor and seriousness not hindered the realism so laboriously pursued.