“Unfortunately, Gondry’s film isn’t kind enough to just let us have our laughs.” 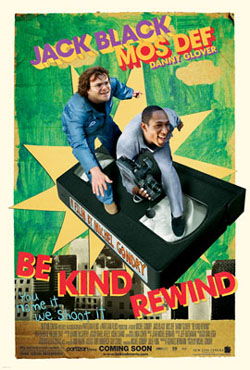 Be Kind Rewind could work as a short film, but as a feature length comedy, it runs dry relatively quickly. A simple yet absurd idea fuels quality parody laughs, but the story attempts to have meaning — which it is unable to muster. Essentially a series of skits sewn together with incongruous drama, Be Kind Rewind bizarrely executes a plot that fuses reality and fantasy in the most unpalatable of manners. When every harebrained concept is wholly unrealistic and the conflict is depressingly real, the outcome is one that can’t find resolution — least of all satisfactorily.

In Passaic, New York, Mike (Mos Def) is left in charge of a shoddy video rental store called “Be Kind Rewind,” while owner Mr. Fletcher (Danny Glover) takes a vacation to investigate how to make his business boom. Being threatened by contractors who wish to level his dilapidated building, his only hope is to raise a huge sum of money to pay for the necessary repairs. When neighboring friend Jerry (Jack Black) accidentally becomes magnetized and erases all of the VHS tapes in the store, Mike must quickly think of a plan to replace them. Jerry suggests re-filming each movie using themselves as actors, and much to everyone’s surprise, the customers actually like the home-made short films. Recruiting Alma (Melonie Diaz) and several of the townsfolk, (allowing them to become “stockholders of their own happiness”) Mike and Jerry start raising money to save the nostalgic store, but soon events spiral out of their control when studio agents discover the copyright-infringing antics of the desperate duo.

A few riotously funny gags occur outside of the direct spoofs of popular blockbuster films, but for the most part the real draw is the amateur filmmaking stabs at vastly recognizable cinematic sensations. An unusual camouflage skit is thrown in for unrealistic measure, a badly botched break-in, and Jack Black donning an awkward “blackface” look are but a few of the jokes mixed in to Be Kind Rewind. Unfortunately most of them are insignificant next to the laughs derived from the mocking of famous films. From Ghostbusters to Rush Hour 2 to Robocop to Driving Miss Daisy, nothing is sacred and everything is fair game.

Be Kind Rewind starts to work on the level of a mindless buddy comedy, but quickly diverts to a lackluster drama that wishes to exude some meaningful motifs of believing in yourself, overcoming odds and the power of community, but it seems tragically wasted. Instantly the boundaries of realism are dashed aside when Jack Black becomes magnetized during his power plant sabotage attempt, and continuously as the city’s colorful characters all willingly play along by participating in the re-filming of classic movies.

The concepts in the film are so largely unfathomable that it doesn’t matter that director Michel Gondry interferes with the viewer by adding distortion to the screen or other devices that remove the audience from becoming lost in the ridiculousness of simply watching a movie. Gathering together $60,000 in one week, “Sweding” dozens of films with little more than three actors and a few props and battling evil movie studio lawyers, Be Kind Rewind doesn’t include much in the way of rationale. Regardless of the few decent laughs, this is a film that loses its focus early on and besots the audience with immature sight gags that blend slapstick with crudeness. By the nonsensical conclusion, little is resolved other than that many decent little ideas couldn’t add up to a fulfilling feature film.

Michel Gondry has again taken an intriguing idea and crafted a bizarre comedy rife with experimentalism. Ludicrous and laugh-out-loud funny at times, dreadfully serious and grounded in reality at others, Be Kind Rewind never fully realizes the potential of its comedic premise with a slew of mixed messages adrift in a sea of unbelievability. The suspension of disbelief required by the audience becomes a far more demanding task when such delirious events happen in a setting so bleakly realistic. Unfortunately, Gondry’s film isn’t kind enough to just let us have our laughs.