“Enough of the film works that the detractors don’t pull the film into a complete, downward spiral” 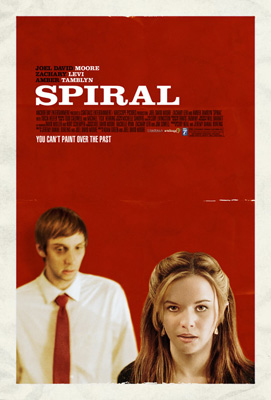 Spiral is a Hitchcockian inspired film, only it’s missing the ingenious storytelling that came with a film from the Master of Suspense. Spiral is a big step up from director Adam Green’s last film, Hatchet. Here Green is co-directing with Joel Moore (Dodgeball, Hatchet), the star of the film. Hatchet had no real originality to speak of, except for a few cool death scenes. Spiral, however, has a more intriguing story, even if it peters out towards the finale.

Spiral is the polar opposite of Hatchet. Where as Hatchet was aiming for campy horror, Spiral is a character driven film that leans towards psychological thriller. Spiral follows the character of Mason who is slowly losing his mind. Mason (Moore) is an asthmatic and awkward character. He has no real friends except for his boss who is not an entirely convincing friend anyways. Mason goes home after work and listens to jazz music and creates sketches. His obsession is getting to know various girls and having them pose for his works of art. He meets Amber (Amber Tamblyn) who is strangely attracted to him. Soon, they begin seeing each other and Amber models nude for him. However, Amber begins to unravel Mason’s dark secrets and soon Mason must learn to control his obsession or risk drawing Amber from memory.

Joel Moore still has yet to shed his goofy nature as an actor. There are several scenes that were unbelievable because Moore is a comic actor. He is hard to take seriously and it never seems he truly becomes Mason. While Mason has strange tics, such as chattering and grinding his teeth, Moore does little to delve below the surface. Mason’s boss, Berkeley (Zachary Levi) does a complete 180, particularly in the latter half of the film. Why he changes so drastically is a mystery.

Spiral does showcase a really cool MacGuffin. Hitchcock coined the term for a plot device that furthers the plot or develops characters but is hardly significant to the overall story. A mysterious, glowing door in Mason’s hallway is shown in several scenes and Green and Moore refuse to show what is there. Instead, the glowing door becomes more of a character and it works perfectly, just like the infamous briefcase from Pulp Fiction.

Spiral contains both creative and just plain exceptional cinematography. The opening shot is a dazzling one that brings to mind 1970’s noir films. A rain-slicked street, illuminated by neon light signs, creates a terrific atmosphere. There is also a fantastic one shot scene that reveals Mason and his obsession with art that should not be missed.

The two directors do a fine job with the script, which is flawed but still appealing. The dialogue is sometimes uncharacteristic and the ending nearly becomes one of those Fight Club endings. Fortunately, enough of the film works that the detractors donâ’t pull the film into a complete, downward spiral.