“Ghosts don’t want to scare the crap out of us anymore; they just want a medium to express their feelings.” 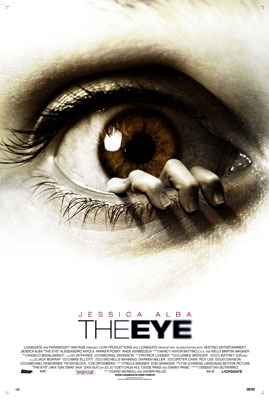 What ever happened to ghosts that haunted just for the sake of haunting? Ever since The Ring broke out in America, the trend for not only the countless Asian remakes, but for most PG-13 ghost stories, the protagonist has been confronted by a whiny specter that just wants someone to listen to their problems. The Eye, the new Jessica Alba horror vehicle, is just that, a drawn out, paranormal psychiatry session.

After a successful eye transplant, Sydney Wells (Jessica Alba) starts to bare witness to some strange and disturbing phenomena. Convinced she can see the supernatural world, Sydney enlists her sister, Helen (Parker Posey), and her doctor, Paul (Alessandro Nivola), to help hunt down her organ donor and unravel the mystery of her haunted eyes.

Co-directors David Moreau and Xavier Palud approach the remake of the creepy Pang Brothers’ cult horror classic with incredible production aesthetics, but add nothing of real value to the original premise. Granted this could be easily said about the majority of remakes, especially in the realm of Asian horror. Rather than creating a script that will send chills down audience’s spines, The Eye is just another superhero adaptation for Jessica Alba to save the world in.

Absurdly written, Alba makes the best her horrendous dialogue. Kudos should be given to the actress for at least giving it a go. Without any embarrassment or hesitation Alba’s character openly gabs about the dark and horrendous imagery she has been subjected to. The inane and harsh responses from both her sister and doctor don’t help the credibility of the screenplay either.

While the production does offer a few creepy moments and jump scares, the real draw is the uniqueness of its concept. Like 21 Grams before it, The Eye delves into the mysteries behind cellular memory, the imprint of feelings leftover from a donor that the patient experiences after an organ transplant. While far less dramatic than the aforementioned title, the idea that these memories could be frightening opens up a world of possibilities. Like its predecessor, the remake of The Eye stands on its own thanks to this outstanding concept.

While the gore-fiend inside might want to see Jessica Alba pushed to the point of insanity, willing to rip out her corneas with her bare hands in order to rid herself of this eyeball haunting demon, The Eye never lets the story get that desperate. All the pieces of the puzzle slowly start to come together when all that reoccurring, creepy imagery turns up after a tedious investigation into the donor’s history. After all folks, ghosts don’t want to scare the crap out of us anymore; they just want a medium to express their feelings.

Using her newfound, paranormal abilities, Alba goes into Fantastic Four mode, desperate to save innocent lives. Does The Eye lose just about all its creepy tension at this point? Absolutely, it trades it off for nothing more than cheap action thrills. At the end of the day viewers can be rest assured, even the scariest of ghoulies only want to help out.